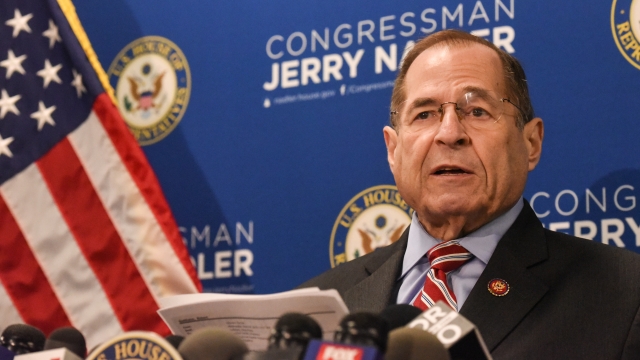 Rep. Jerry Nadler said "it falls to Congress to respond to the crimes, lies and other wrongdoing of President Trump."

The chairman of the House Judiciary Committee held a news conference Wednesday after Robert Mueller made a public statement about his investigation.

Rep. Jerry Nadler said his committee will continue investigating President Donald Trump and whether he obstructed justice. Nadler also said "all options are on the table" in regard to impeachment.

"Therefore, as Mueller again highlighted this morning, it falls to Congress to respond to the crimes, lies and other wrongdoing of President Trump," Nadler said. "We will do so."

Nadler didn't specifically answer questions about whether he would subpoena Mueller. He said the former special counsel "reaffirmed what was in the investigation."

Mueller made it very clear during his news conference Wednesday morning that if he were to testify, he wouldn't say anything beyond what's already in the report.

"It contains our findings and analysis and the reasons for the decisions we made. We chose those words carefully and the work speaks for itself," Mueller said. "And the report is my testimony. I would not provide information beyond that which is already public in any appearance before Congress."

House Speaker Nancy Pelosi also issued a statement Wednesday. She said "Congress will continue to investigate and legislate to protect our elections and secure our democracy."

She also called on the Senate to pass H.R. 1, which would, in part, expand voting rights and strengthen the government's ethics laws. It would also require candidates for president and vice president to disclose 10 years' worth of their tax returns.

Senate Majority Leader Mitch McConnell has called the bill a "power grab" by Democrats. It's expected to fail in the Senate.