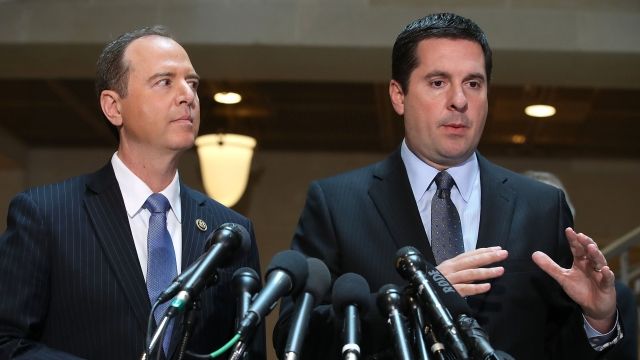 "These actions simply raise enormous doubt about whether the committee could do its work," Rep. Adam Schiff said.

Schiff, the top Democrat on the House committee investigating Russian attempts to interfere in the election, says the committee's chairman has clouded the investigation. Here's why:

Based on the "dozens" of reports Nunes read, most of the collection occurred after the November election into January.

Nunes said the communications appeared to be "obtained legally." But he said he has some concerns.

A reporter asked, "Are you saying that it was political surveillance of political opponents that the president has suggested in his tweets?"

Nunes replied, "What I've read bothers me, and I think it should bother the president himself and his team because I think some of it seems to be inappropriate."

Nunes later said, "There are things to me that don't reach the level of foreign intelligence value. And if that's the case, you have to ask yourself, 'Why did those end up in reports?'"

His statement came two days after FBI Director James Comey said there was no evidence to support Trump's allegations that Trump Tower was wiretapped by the Obama administration.

When asked by reporters about the information divulged by Nunes, Trump said he felt "somewhat" vindicated about the wiretapping claims.

"On the basis of what the chairman has said and on the basis of my conversation with the chairman, I can say this: There is still no evidence that the president was wiretapped by his predecessor," Schiff said.

"There's additional unmasking of names, which I think is totally inappropriate ... and then you have the issue of the names that were put into these intelligence reports," Nunes said.

Schiff said he expressed his "grave concerns" about how Nunes conducted himself Wednesday to the chairman himself. And he told reporters he didn't think more names were necessarily unmasked.

"As I understand from my conversation with the chairman, most of the names in the intercepts were in fact masked, and the chairman's concern was that he could still figure out the identities of some of the parties even though the names were masked. Well, that doesn't mean that the masking was improper," Schiff said.

Nunes said the surveillance had nothing to do with Russia or the investigation into Russian election activities. But Schiff didn't think it was appropriate for Nunes to share the information with the president.