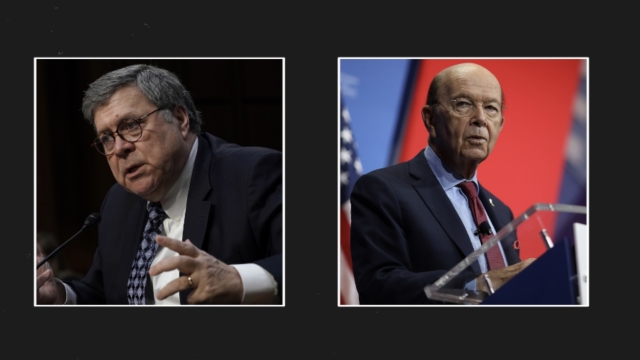 Lawmakers ruled that Barr and Ross failed to comply with congressional subpoenas related to the Trump administration's efforts to add a citizenship question to the 2020 census.

The House oversight committee voted last month to hold Barr and Ross in contempt for not turning over certain documents that could shed light on why the Trump administration wanted to add the question. But the Justice Department rebuffed the committee's request, saying those documents were protected by various confidentiality privileges.

Oversight committee chairman Elijah Cummings said holding a Cabinet secretary in criminal contempt of Congress is a serious matter and that he did not take the decision lightly. But he said Ross and Barr QUOTE "blatantly obstructed our ability to do congressional oversight" into why the administration was trying to add a question to the census for "the first time in 70 years."

The White House press secretary said in a statement that Wednesday's vote was "another attempt to harass the president and his administration." She also alleged House Democrats know they don't have legal grounds to see the documents but that "their shameful and cynical politics know no bounds."

The Supreme Court ruled in June that the Trump administration cannot add a citizenship question to the 2020 census unless it gives a valid reason that the question is needed. The DOJ argues the question would help it enforce the Voting Rights Act of 1965. But critics worry it would scare immigrants away from filling it out, leading to inaccurate population counts. And despite the Trump administration's continued push for the question's inclusion, the Census Bureau has already begun printing the 2020 forms without it.

Barr and Ross wrote in a letter on Wednesday that they did not try to "obstruct lawmakers' inquiry." They said the documents and materials in question "are subject to a number of legal privileges that have been upheld in the pending litigation, as well as the president's assertion of executive privilege." The officials added, QUOTE "There is no information to hide; there are institutional integrities to preserve."

Wednesday marks the first time a commerce secretary has been found in contempt. Barr and Ross could be subject to penalties of up to a year behind bars and a $100,000 fine — but NBC News points out that that seems unlikely.

There's also a plan B for obtaining the census documents; the resolution authorizes the House to seek a court order enforcing the subpoenas.