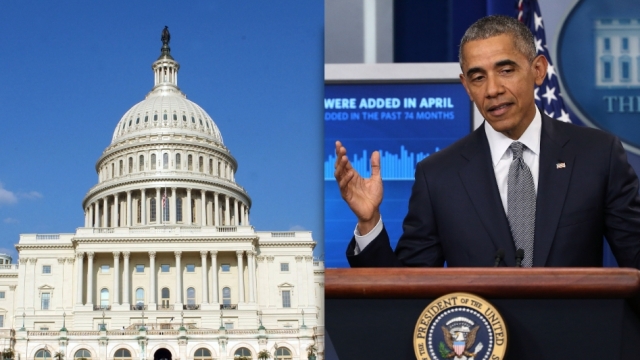 SMS
House GOP Wins Fight On Obamacare Subsidies ... For Now
By Eugene Daniels
By Eugene Daniels
May 12, 2016
The ruling doesn't actually affect the subsidy program just yet, and the administration is likely to file an appeal.
SHOW TRANSCRIPT

In the legal fight over Obamacare, you can add a 'W' to the GOP column. At least for now.

On Thursday, a federal judge ruled the administration wasn't funding the subsidy program correctly. Basically, the subsidies help low-income families afford insurance. The sticking point is whether or not Congress actually allocated any money that insurance companies need to make policies more affordable.

The judge on the case said, "Congress authorized reduced cost sharing but did not appropriate monies for it. Congress is the only source for such an appropriation, and no public money can be spent without one."

Both sides are interpreting the ruling pretty differently. The lawyer who represented the GOP in the case says this victory protects the constitutional principle of separation of powers and reaffirms Congress' "power of the purse."

But the White House is accusing the GOP of playing politics with the legal system. White House Press Secretary Josh Earnest said, "It's unfortunate that Republicans have resorted to a taxpayer-funded lawsuit to refight a political fight that they keep losing. They've been fighting this fight for six years."

If the subsidy program is eliminated, the Obama administration says, insurers would increase plan premiums to cover the cost, which will price millions of people out of insurance plans. That outcome would surely be seen by Obamacare opponents as proof its plans aren't actually affordable.

But the ruling doesn't affect the program just yet, and the administration will likely be filing an appeal. That appeal could carry this challenge all the way to the Supreme Court, which has already ruled twice in favor and just once against Obamacare.

This video includes images from Getty images and clips from The White House and HealthCare.gov.