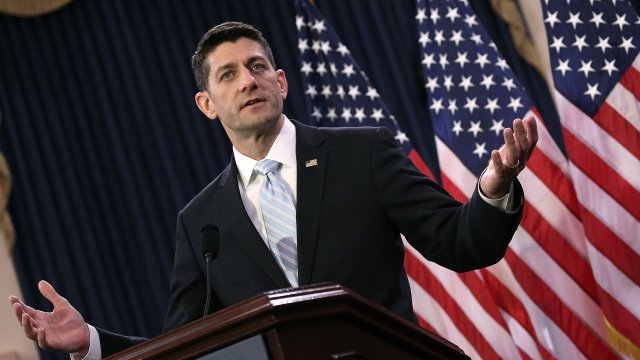 SMS
House GOP Immigration Bill Addresses Dreamers And The Border Wall
By Jake Jones
By Jake Jones
June 14, 2018
The White House hasn't offered support for the bill just yet, but it seems to meet a number of President Donald Trump's demands.
SHOW TRANSCRIPT

Republicans in the House drafted a bill that would address a number of immigration issues, including offering a route to citizenship for so-called Dreamers.

The bill would create a path to citizenship for people who were brought into the U.S. illegally as children. It would also set aside $25 billion for a southern border wall and other security measures.

Additionally, the bill would end the diversity visa lottery and replace it with a merit-based visa program. But that program will be tied to border security funding, according to a draft obtained by Politico.

Republicans also addressed the separations of children from parents in the bill. If passed, children and their guardians would not be allowed to be separated at the border.

It's not clear how much support the bill has. The White House hasn't offered support for the bill just yet, although it does seem to meet a number of President Donald Trump's demands.