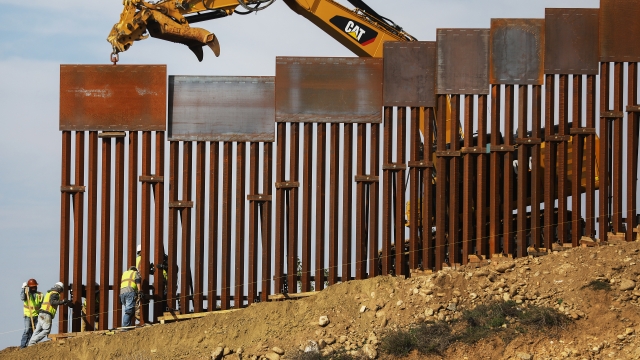 The House of Representatives wants a federal court to block the Trump administration from using Defense Department funds to build a border wall along the U.S.-Mexico border.

The House filed a 56-page motion on Tuesday, asking a judge to issue a preliminary injunction against the president's plan to use funds originally intended for military construction and counter-narcotics programs.

As part of President Trump's national emergency declaration issued back in February, The White House said it would take more than $600 million from the Treasury Forfeiture Fund and up to $6.1 billion from the Department of Defense to help pay for a border wall. The declaration gives him access to that government funding without going through Congress.

This latest move by the House comes more than two weeks after it filed a lawsuit against the president's declaration. Both the initial complaint and the motion argue that the Trump administration's decision to divert funds violates the Appropriations Clause of the Constitution, which gives Congress the power to designate federal spending.

The motion also argues that some of the legal provisions the White House is using to divert the money to wall construction don't apply in this case.

For example, one provision says money intended for military construction can only be applied to a national emergency "that requires use of the armed forces" and if the money goes toward a project that's "necessary to support [the] use of the armed forces." The House says neither of those requirements are met in the border wall project.

It's worth noting that the House did not challenge the money the Trump administration is tapping from the Treasury Forfeiture Fund or the $1.375 billion in funding that Congress approved for border barriers earlier this year.

The Justice Department declined to comment on the House's motion Tuesday.