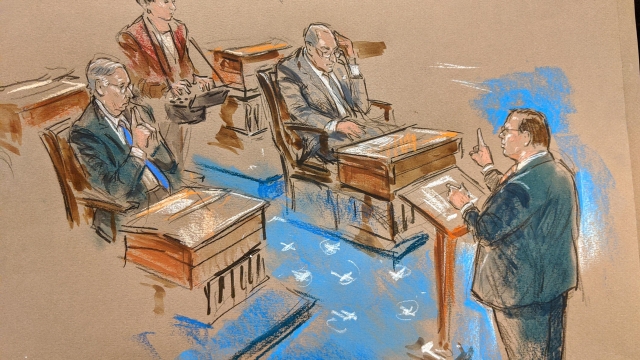 "The managers for the House of Representatives have seven hours and 53 minutes remaining," Chief Justice John Roberts said.

House Democrats spent their final day in this impeachment trial arguing the President obstructed Congress and engaged in a cover-up.

"President Trump tried to cheat. He got caught, and then he worked hard to cover it up," Rep. Hakeem Jeffries said.

"You cannot use executive privilege to hide wrongdoing or criminality or impeachable misconduct, and that is exactly the purpose for which they seek to use it," Rep. Adam Schiff said.

Rep. Adam Schiff asked the Senate to rid the U.S. of the alleged threat the president poses.

Republican senators do not appear to be moved, despite passionate arguments from House managers.

"I'm trying do my job to be impartial. I'm listening to both sides. I think the House managers have done a poor job," Sen. Rick Scott said.

And there is some new evidence coming to light, even if not in the trial. ABC News obtained an audio recording from 2018 in which it appears President Trump responds to concerns then-Ukraine Ambassador Marie Yovanovitch was critical of him and should be fired.

The recording seems to back up some of the story of Lev Parnas, a former associate of the president's personal attorney.

But it also undermines Democrats' arguments the president wanted her fired as part of a pressure campaign.

"I don't care to hear finger-pointing at the House and how they conducted their investigation. What I want to hear is their facts and circumstances to disprove what we've heard so far," said Sen. Doug Jones.

President Trump's legal team begins presenting its case Saturday morning at 10 ET. They say they'll only go for a few hours before picking back up on Monday.