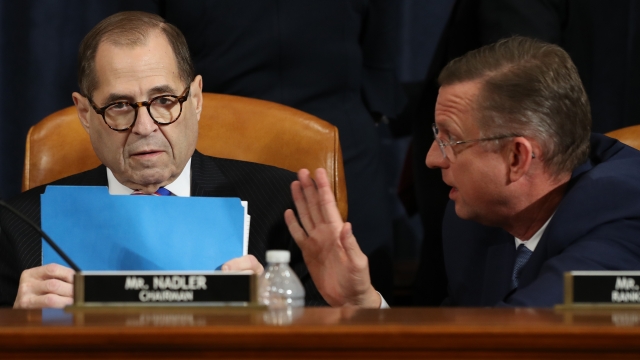 SMS
House Dems Release Report On Constitutional Grounds For Impeachment
By LeeAnne Lowry
By LeeAnne Lowry
December 8, 2019
The document makes it clear: The Democrats don't believe the president needs to commit a crime in order to be impeached.
SHOW TRANSCRIPT

House Judiciary Committee Democrats released a report Saturday summarizing the findings from its first week of public hearings. The combined testimonies from the four legal experts in last week's hearings lay out the constitutional grounds for impeachment.

To be clear, the 52-page report doesn't accuse President Donald Trump of any impeachable offenses. It was meant to be the groundwork for Monday's hearing. At that hearing, both the House Intelligence and Judiciary committees will present evidence against President Trump.

The document takes a clear stance that the Democrats don't believe the president needs to commit a crime in order to be impeached.

The committee will use this instead of the reports that were used in the Nixon and Clinton impeachment inquiries. Judiciary Committee Chairman Jerry Nadler wrote in a foreword to the new report that the earlier reports are "useful points of reference, but no longer reflect the best available learning on questions relating to presidential impeachment."

Articles of impeachment could be introduced as early as next week, but there's no clear timeline.