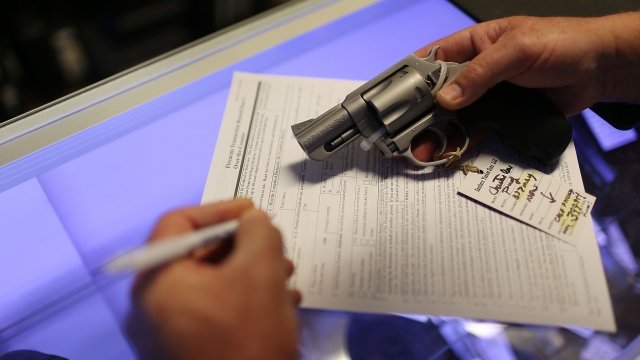 The legislation, crafted by Rep. Mike Thompson, would expand background check requirements to almost all firearm sales, including online and gun show transactions. There are some exceptions for law enforcement members and private family sales.

Current federal regulations only require the checks for sales from licensed dealers, and some states add their own stipulations.

Also on hand to present the bill was former U.S. Rep. Gabby Giffords. The bill's introduction falls on the eighth anniversary of the fatal Tuscon, Arizona, shooting that seriously wounded the congresswoman.

"Now is the time to come together, be responsible. Democrats, Republicans, everyone. We must never stop fighting. Fight, fight, fight! Be bold. Be courageous. The nation's counting on you," Giffords said.

For example, Ohio has moved to strengthen its gun background check laws and California raised the legal gun purchase age.

And last month, the Trump administration issued a ban on bump stocks, devices that allow semiautomatic weapons to fire faster.

The bipartisan proposal is backed by some House Republicans, but it appears to be more of a symbolic move. It's not likely to advance in the Republican-controlled Senate.