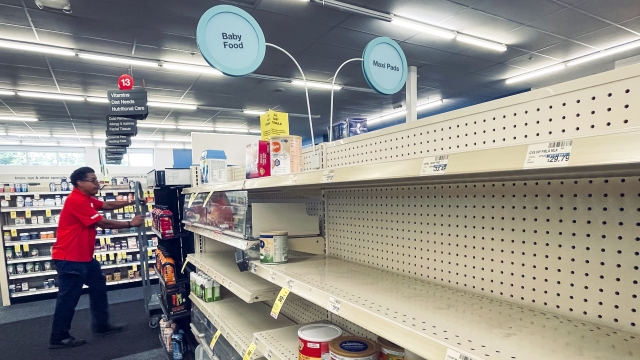 House Democrats unveiled a $28 million emergency spending bill Tuesday to address the shortage of infant formula in the United States.

Rep. Rosa DeLauro, the Democratic chair of the House Appropriations Committee, said the money would increase Food and Drug Administration staffing to boost inspections of domestic and international suppliers, prevent fraudulent products from getting onto store shelves and acquire better data on the marketplace.

The shortage stems from a February recall by Abbott Nutrition that exacerbated ongoing supply chain disruptions among formula makers, leaving fewer options on store shelves across much of the country. DeLauro has also been critical of the FDA for a failure to address "with any sense of urgency" the safety concerns at Abbott's plant in Michigan that prompted the shortage.

The legislation gives Democrats a chance to show they are trying to address a frightening scenario for young families across the country scrambling to ensure they have an adequate supply of food for their babies. Some Republicans have placed responsibility for the shortage squarely on President Joe Biden's administration while Democrats Tuesday blamed "corporate greed and consolidation."

"Mothers across the country are looking to us for help and we will not force them to face this crisis on their own," said House Majority Leader Steny Hoyer. "We're on their side. We'll see who is on their side when we vote on this legislation."

Abbott is one of only a handful of companies that produce the vast majority of the U.S. formula supply, so their recall wiped out a large segment of the market. Federal regulators reached a deal this week to allow the company to restart the Michigan plant, but Abbott said it will take eight to 10 weeks before new products begin arriving in stores.

The House Appropriations Committee will hear from FDA Commissioner Robert Califf on Thursday to discuss the agency's budget. Lawmakers are expected to focus much of the discussion on the formula shortage. A panel is also expected to have a second hearing featuring experts who will discuss the recall of infant formula produced at the Abbott facility and the FDA's handling of the recall.

The House is expected to take up the emergency spending measure later this week before lawmakers head back to their congressional districts for the next two weeks. It's unclear where Republicans stand on the bill. Rep. Kay Granger, the ranking Republican on the House Appropriations Committee, said they need more details.

"We want to do something," Granger said. "We want to put more meat on the bone, more specifics on what needs to be done."

"Too little too late," added Rep. Ralph Norman. "They should have seen this coming months ago."

The bill would also need approval in an evenly divided Senate, where it will need support from at least 10 Republicans before it could be signed into law. GOP senators panned the effort but didn't dismiss it outright.

"Obviously it's a big problem. We need to help families solve it," said Sen. Roy Blunt, a member of GOP leadership.

Blunt said the administration should have months ago considered eliminating tariffs on baby formula made in Europe that meets U.S. standards.

DeLauro said much of the money would go to inspections of facilities making baby formula.

"FDA does not have the adequate inspection force to be able to do that, and to do it in a timely way," she said.

She said speed was of the essence, and then lawmakers would focus on accountability for the shortage.

"And I'm talking about accountability at the FDA as well, because they dragged their feet for several months before there was a recall," DeLauro said.

Democrats introduced a second bill Tuesday that the House is also expected to vote on this week. That bill, sponsored by Rep. Jahana Hayes, would in extenuating circumstances give participants in an assistance program commonly known as WIC the ability to use vouchers to purchase formula from any producer rather than be limited to one brand that may be unavailable.

Meanwhile, the FDA is looking to boost imports by streamlining its review process to make it easier for foreign manufacturers to begin shipping more formula into the U.S.

Swiss conglomerate Nestlé said Tuesday it had already increased production and moved up planned shipments to the U.S. to alleviate the shortages. Nestlé is also rushing the shipments via air.

Nestlé said it prioritized the shipment of two products that it was already importing — Gerber Good Start Extensive HA from the Netherlands and Alfamino from Switzerland — because they serve a critical need. The products are made for babies who are allergic to cow's milk.

Nestlé said it is reviewing the new guidance from the FDA, which temporarily relaxes import restrictions on baby formula, and it might start importing more varieties.

"We are reviewing the guidance and assessing where we may be able to tap into the Nestlé global nutrition network to help," a company spokesperson said in a statement.