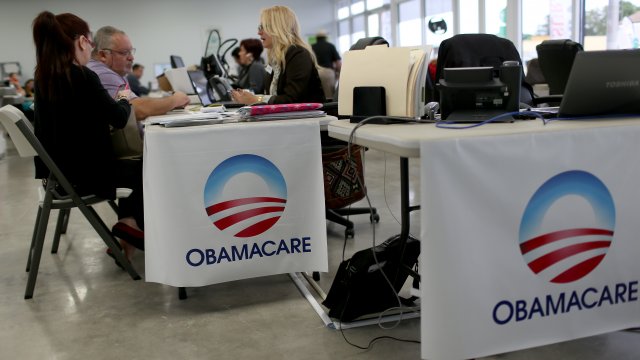 Five House committees are demanding that the Trump administration provide documents explaining how the Justice Department decided the Affordable Care Act is unconstitutional.

House committee chairmen Elijah Cummings, Frank Pollone, Richard Neal, Bobby Scott and Jerry Nadler sent two letters — one to the White House and the other to the Justice Department.

Let's take a step back. In December, a federal judge for a district court ruled that Obamacare was invalid because of the individual mandate to purchase health insurance. Once Congress did away with the penalty for being uninsured, the judge said the law was no longer constitutional. Later that month, he said the law could stay in place for the time being, pending a plan to replace it.

Previously, the Justice Department said it wouldn't defend the constitutionality of the individual mandate in Obamacare, but it argued that some parts of the law should stand.

The Justice Department backtracked on that statement in March and sent a letter to an appeals court, saying it agreed the ACA is unconstitutional and should be struck down.

In April, House Democrats sent letters to the DOJ, the Department of Health and Human Services and the White House, asking for "documents and information regarding the involvement" of White House officials in the administration's decision to not defend the constitutionality of the ACA.

The five chairmen say the White House never responded to the letter, but the DOJ said it would "respond promptly to the request," though it never did.

Then, earlier this month, the Justice Department filed a formal request to strike down Obamacare in its entirety.

Now, Cummings, Pallone, Neal, Scott and Nadler say it's Congress' "responsibility as an independent and co-equal branch of government to understand how this decision was made." They demanded a "complete" response to their previous request for information by May 24 and the testimony of relevant DOJ officials.

The committee chairmen said if they don't get a response by the deadline, they'll "consider alternative means to obtaining compliance."