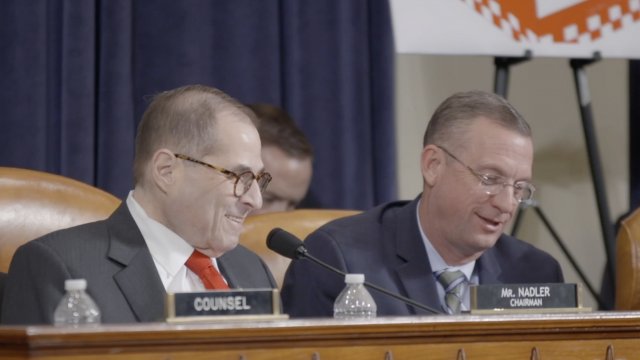 Two articles of impeachment, nine pages long, and in a couple of days the House Judiciary Committee is expected to vote to send the articles to the entire House to vote on impeaching the President of the United States.

The first article, abuse of power, says "Using the powers of his high office... President Trump solicited the interference of a foreign government, Ukraine, in the 2020 United States Presidential election." Democrats say the president conditioned aid and a head of state meeting at the White House in exchange for the announcement of investigations into former Vice President Joe Biden, his son and interference in the 2016 election. All are unfounded allegations.The second article, obstruction of Congress, says President Trump “directed the unprecedented, categorical and indiscriminate defiance of subpoenas.”

The draft hints at "previous efforts" to undermine the government, a nod to the Mueller probe. Democrats discussed folding the probe into a third article, obstruction of justice, but Kildee says they knew they couldn't get everyone in their party on board.

Republicans say this impeachment will be a low point for Congress. It's almost certain House Democrats will overwhelmingly vote to impeach President Trump and a trial will go forward in the Senate.Senator Sherrod Brown, who disagrees with the President on nearly every issue, says if it comes to a trial, he only cares about whether the president has violated the Constitution.

A full House vote is expected at some point next week. The rules for a trial in the Senate have not been decided.