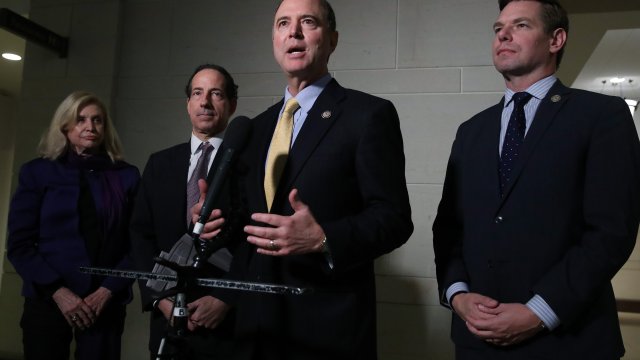 So far the House Democrats' impeachment inquiry has looked a lot like this... current and former officials walking in and out of closed-door depositions.

A move Republican lawmakers criticize as secretive and ill-conceived.

"I think the American people have decided overwhelmingly this has been an unfair process," U.S. Representative Tom Cole said.

But on Tuesday, Democratic lawmakers released an 8-page text resolution. It outlines potential rules for lawmakers to follow during impeachment proceedings. Leading Senate Majority leader Mitch McConnell to say, "Obviously they responded to the pressure that we put on them, to try to handle this in the most transparent way."

The resolution first reiterates the "committees on Intelligence, Financial Services, Foreign Affairs, Oversight and Reform, Ways and Means, and the Judiciary are directed to continue their ongoing investigations."

But the intelligence committee is specifically moved away from closed-door depositions and into public hearings.

It's a move that excludes some of the most vocal Republican lawmakers on the inquiry.

Here are the rules:

The intelligence chair and ranking minority leader can question witnesses for up to 90 minutes, the time split equally between both.

Both can request certain witnesses and issue subpoenas, but the minority leader's subpoenas have to be "in concurrence with the chair."

The resolution also says the House Intelligence Committee can issue a report sharing its findings and recommendations to the Judiciary Committee.

The Judiciary would then redact classified information and publicly release the report.

Democrats issued a fact sheet on the resolution. In it they said the resolution gives President Trump an opportunity to participate by:

presenting their case and responding to evidence, submitting written requests for additional testimony or other evidence and attend hearings among other things.

It also issued a warning. If President Trump "unlawfully refuses to cooperate" with congress, the Chair of the Committee on Rules can deny specific requests by the President or his counsel.

The full house is set to vote on the resolution Thursday.

It will be the first time the majority of the House goes on record regarding the impeachment of President Trump.