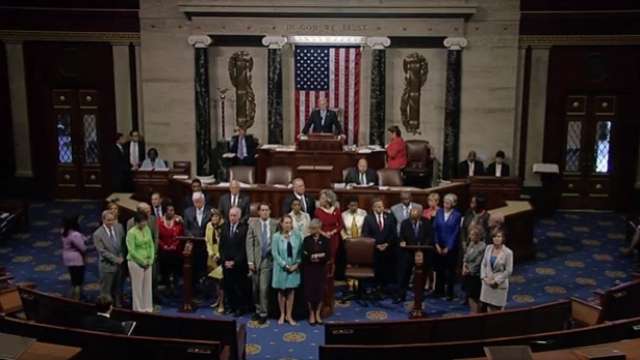 House Democrats began staging a sit-in Wednesday morning on the House floor to get a vote on gun control measures.

The sit-in is led by civil rights icon Rep. John Lewis of Georgia.

“Those who work on bipartisan solutions are pushed aside. Those who pursue common sense improvement are beaten down. Reason is criticized. Obstruction is praised,” Lewis said on the House floor.

According to NBC, the sit-in isn't being aired because the House isn't technically in session.

However, the representatives have been documenting their sit-in on Twitter. One congressman called on C-SPAN to "turn the cameras back on," but C-SPAN tweeted the House itself controls the cameras, not the network.

The sit-in comes two days after the Senate failed to pass four gun-control amendments — two proposed by Democrats and two by Republicans. Two aimed to prevent the sale of firearms to people who have been investigated for terrorism in the past five years. One sought to close the background check loopholes for gun shows and internet sales. A fourth would have clarified the terminology for firearms restrictions for those with mental illnesses and increased funding for the National Instant Criminal Background Check System.

This video includes clips from C-SPAN and WFTV and images from Getty Images.