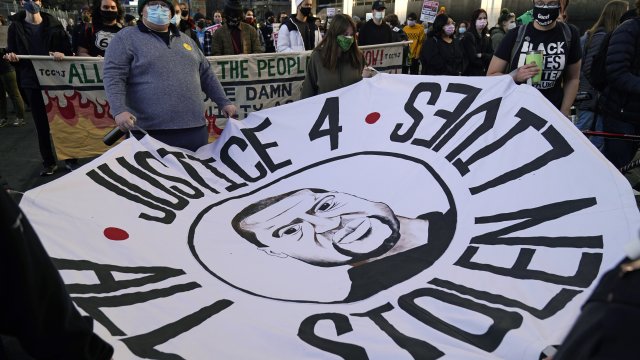 SMS
House Police Reform Legislation Advances To Senate
By Alexandra Miller
By Alexandra Miller
March 8, 2021
The bill would ban chokeholds and create a database for law enforcement officer misconduct, among other things. But it faces political hurdles.
SHOW TRANSCRIPT

A wide-ranging police reform bill named in honor of George Floyd has made its way to the Senate.

The 138-page legislation would ban federal agents from using chokeholds, limit legal protections for police officers, create a national registry to track law enforcement misconduct and work to end racial profiling, among other actions. The legislation first passed the House last year with some GOP support. But the 2021 version advanced along party lines.

Congressman Brian Fitzpatrick, a Republican who voted for the bill in 2020 but not this time around, said in part: "House leadership is ignoring our bipartisan fixes. ... We must build a bridge and unite to put forth a unified solution."

Though Democrats have control of the Senate, it's unclear how they'd get the 60 votes to pass the House bill. A competing bill last year led by Sen. Tim Scott, took a less sweeping approach to making changes to police departments. Sen. Tim Kaine says this time around, both sides will have input on the House bill.

"If you put it through committee and the committee members, Democrats and Republicans, all have their chance to kind of put their thumbprint on it and offer amendments and try to shape it, then you raise the likelihood of it being a bipartisan winner on the floor," he said.

But the hangup will most likely once again lie with qualified immunity, which protects police officers from civil suits. Most Democrats want to ban it; Republicans do not.

Democrats like Brown are still hopeful they won't have to divide the legislation up and pass it in a piecemeal way, but that may ultimately be the only way they see other parts of the bill succeed.