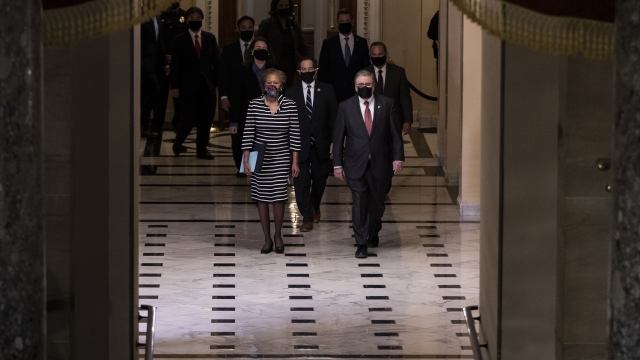 SMS
House Delivers Article To Senate, Triggering Trial
By Newsy Staff
By Newsy Staff
January 26, 2021
This is not something we saw the first time.
SHOW TRANSCRIPT

Stephanie Liebergen is on capitol hill with what we can expect in these coming weeks. Stephanie Good Morning, So we watched the articles being delivered on Newsy last night, but what will happen today?

All 100 senators will be sworn in today to serve their role as jurors for the impeachment trial.

That is not something we saw the first time. Normally when it's a presidential impeachment, the Constitution stipulates that the Chief Justice of the Supreme Court needs to preside over the trial. So since Trump is now a former president, that doesn't kick that rule into effect, it instead turns it over to the regular presiding officer in the Senate. That's technically Vice President Kamala Harris and when she's not around, it falls to the president pro tem of the Senate, which is Patrick Leahy, who will preside over the second impeachment trial for Trump.