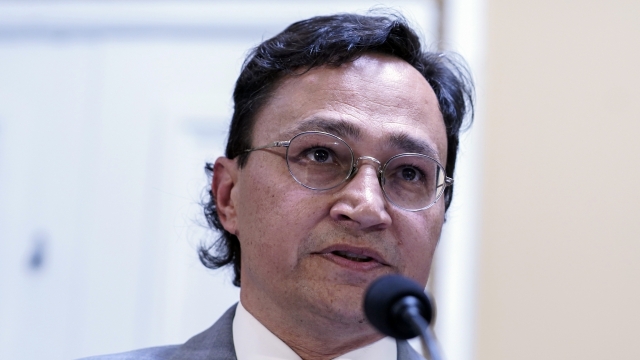 Cherokee Nation Principal Chief Chuck Hoskin Jr. is lobbying on Capitol Hill for a long-overdue promise to be fulfilled.

"It is my firm belief and expectation that the House of Representatives will take swift action to seat our Delegate to Congress, honor our treaty right and therefore make the United States good on its promise to our Cherokee ancestors," Hoskin Jr. said.

The agreement — that the Cherokee Nation be given a delegate in the U.S. House — comes from the 1835 Treaty of Echota.

This is the same treaty that led to the infamous Trail of Tears, which forcibly removed thousands of Native Americans from their homes east of the Mississippi and sent them to Indian Territory in Oklahoma.

Dr. Brian Burkhart from the University of Oklahoma's Native Nations Center says it's hard to quantify all the loss.

"Every treaty the United States has made with Indian tribes has been broken by the United States," he said. "Loss on all these different levels, literally land, literally life, you know, your relatives, many of them no longer with you, and even the trauma of being literally snatched from your dinner table, and drug into the night and leaving all of your animals, all of your possessions, all of your memorabilia, everything of your life behind and just taken from you and given to other people."

It is estimated that the Cherokee Nation lost as much as 25% of its population on the journey.

While this delegate in Congress would not be able to vote on the House floor, they would be able to introduce legislation, serve on committees and push policy positions.

"I'm not exactly a wallflower. Once seated, I plan to roll up my sleeves and get to work," Cherokee Nation Delegate Kim Teehee said.

She plans to do all of that and more.

U.S. territories, like the U.S. Virgin Islands and Guam, have far fewer people than the 430,000-member Cherokee Nation, but do have a delegate in Congress.

"It sends a message to all tribes that we're a government of its word," she said. "But in addition to that, it would also, I think, give some measure of justice, especially to those families who were so impacted. And for those who lost their lives on that forced march."

Fort Smith National Historic Site was the Five Tribes' final stop before what's now Oklahoma, but some groups are erasing its history from schools.

The proposal has some bipartisan support, but some supporters fear that when the House changes to a Republican majority, this proposal could be put on the back burner for another couple of years.

"When I was a staffer in Congress, I ran a bipartisan congressional Native American Caucus, and I had a Republican co-chair and a Democratic co-chair. So my point in saying that is, we find our champions in both chambers," she said.

Members of the House Rules Committee who spoke during the hearing seemed open to the idea of moving forward.

Hoskin Jr. says he wants Teehee to be seated before the end of the year and believes it can be done by way of a House resolution or change in statute.