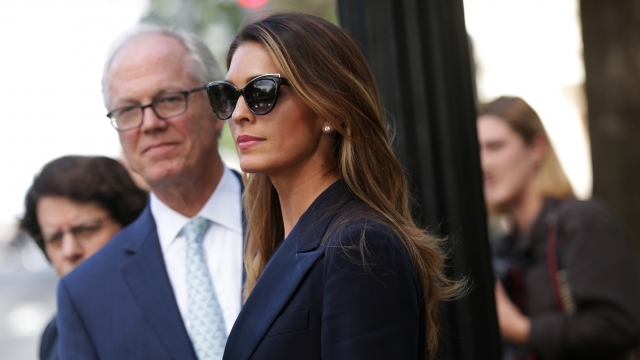 The House Judiciary Committee has released an initial transcript of its interview with former White House Communications Director Hope Hicks.

On Wednesday, Hicks appeared before the committee in a closed-door hearing as part of the committee's investigation into potential "obstruction of justice, public corruption, and other abuses of power" by the president and administration officials. Committee Chairman Jerry Nadler said in a statement that Hicks' lawyers had blocked her "from answering questions 155 times" during the nearly eight-hour interview. Many of the questions were related to President Donald Trump's actions that were detailed in Special counsel Robert Mueller's report, including "the resignation of former National Security [adviser] Michael Flynn" and "the president’s firing of FBI Director James Comey."

During the interview, Hicks' lawyers contested she was "absolutely immune" from having to testify on certain issues due to her having been a close adviser to President Trump. But Nadler challenged the claim, saying, "With all due respect, that is absolute nonsense as a matter of law."

Hicks did answer some questions about her time on the Trump campaign. She acknowledged that the Trump campaign did feel "relief" when Wikileaks released hacked materials from Hillary Clinton’s campaign. She said that she would not accept any dirt on political opponents from foreign governments today, and would alert the FBI if she "felt it was legitimate enough."

Hicks' testimony, or lack thereof, is just another roadblock for Democrats who are weighing impeachment proceedings against the president. The judiciary committee has already voted to hold Attorney General William Barr in contempt for not handing over the complete, unredacted Mueller report. It's also preparing to sue former White House counsel Don McGahn for not complying with the committee's subpoenas.