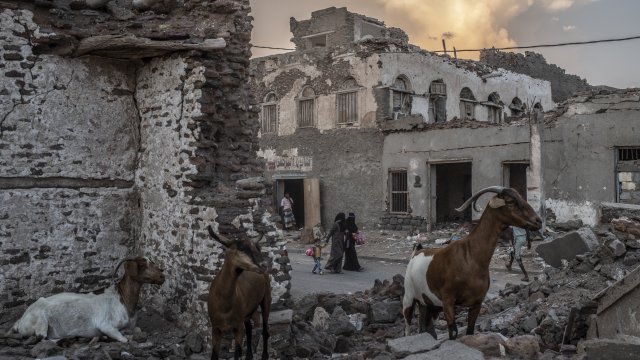 SMS
House Approves Ending Military Support For Saudi Coalition In Yemen
By Katherine Biek
By Katherine Biek
February 14, 2019
The resolution calls on the authority given to Congress in the War Powers Act of 1973.
SHOW TRANSCRIPT

The House passed a resolution Wednesday that seeks to end U.S. military support for a Saudi-led coalition fighting in Yemen.

The resolution invokes the War Powers Act of 1973, which gives Congress the authority to direct the president to remove U.S. forces from hostile situations if such forces are there "without a declaration of war or specific statutory authorization."

The House vote came less than a week after the Trump administration missed a deadline set by Congress to identify the people responsible for killing journalist Jamal Khashoggi.

Khashoggi was a known critic of Saudi leadership, and U.S. lawmakers have concluded Crown Prince Mohammed bin Salman is responsible for the Washington Post columnist's death. Although the Saudi government has denied those accusations.

The Yemen resolution now moves to the Senate, which passed a similar resolution late last year. But Senate approval this time around would set up a possible showdown between lawmakers and the White House.

The Trump administration has threatened to veto the measure. It has said the War Powers Act does not apply to the nation's role in the Yemen conflict, since it doesn't provide any combat support to the Saudi-led coalition.

If President Trump were to veto the resolution, a two-thirds majority in both the House and the Senate would be needed to override it.