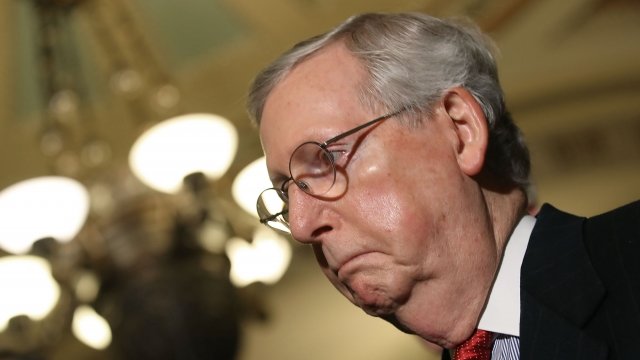 SMS
It's Time To Resolve The Differences Between The 2 GOP Tax Bills
By Newsy Staff
By Newsy Staff
December 4, 2017
Congressional Republicans this week begin the work of resolving the differences between tax bills passed in the House and Senate.
SHOW TRANSCRIPT

By now you know that Republicans in the Senate have passed a tax overhaul bill. So have House Republicans, which means there are two different bills that now have to be reconciled.

"We'll be able to get to an agreement," Senate Majority Leader Mitch McConnell told ABC's "This Week." "I'm very optimistic about it."

McConnell says his party will come to an agreement before Christmas.

There'll definitely be a lot to unpack before then. We've covered the differences between the House and Senate versions. One sticking point is the number of individual income tax brackets. Today, there are seven, and the Senate bill keeps it that way — whereas the House version creates just four brackets, starting at 12 percent and going up to 39.6 percent.

So it'll be a busy week for Congress. While work on the tax overhaul is ongoing, members also face a looming deadline. By Friday they need to pass a spending plan to avoid a government shutdown.