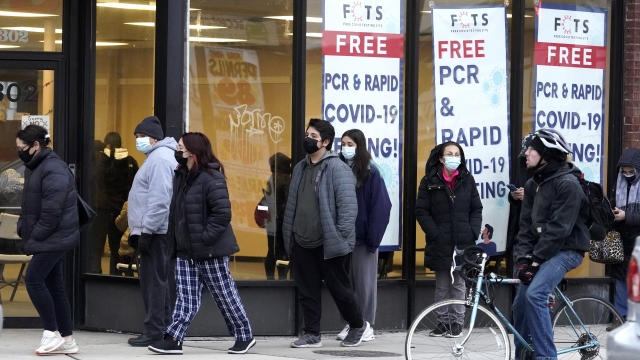 The Omicron variant's spread across the country is leading to record-high cases counts, and perhaps is reflected in the demand for testing.

Like other states, Florida is experiencing its highest average daily cases. While the state government did not announce any new testing sites despite the rise, local governments responded.

"Let me point out, from a local perspective we've not received any assistance from the state of Florida at our testing sites," said Orange County Mayor Jerry Demings. "Local governments have been left to figure it out and respond on our own. We're doing the best that we could do to take care of our residents during this current surge just like we've been doing throughout this pandemic."

Both Tampa and Hillsborough County opened additional locations — one aimed to help meet holiday demand, with a line stretching half a mile down the road New Year's Eve day.

The Florida Hospital Association hospitals reported an increase in emergency room visits by people seeking COVID-19 tests. The organization asked patients to seek tests in other places instead of the ER if they experienced mild or no symptoms. "If anyone is experiencing symptoms like shortness of breath or chest pain — which can be symptoms of COVID-19 and many other critical illnesses — they should call 911 or seek care in one of our ERs," the organization tweeted.

"It can really be a public health crisis for our patients because our patients who are in there and sick and need attention — it's just drained away by people who are there who really have a right to want to know if they have COVID, they want to come off isolation and protect their family, but just to find any other way other than the emergency department, we would really appreciate it," said Dr. Peggy Duggan.

Duggan is the executive vice president and chief medical officer at Tampa General Hospital. She said while the Delta surge was about capacity, this surge is about staffing.

"What we're seeing is very different than the last round with Delta. Patients are in the hospital for shorter spans of time and they're definitely less sick so it's not as long a length of stay, not as many ICU patients," Duggan said. "Although I always counter that with: This has been the pandemic of two-week rules, right, so we're really not far enough into it in our area to be sure we're not going to see really more acutely ill patients, and some of our vulnerable patients will be quite ill with it of course."

Like others, Tampa General Hospital pivoted to a different monoclonal antibody treatment thought to be better against Omicron than ones previously relied on during the Delta surge. However, that treatment remains in shorter supply. Federal data shows during the last distribution period, Florida was one of about eight states to receive more than 2,000 courses of it.

Duggan said her hospital is using it for its most vulnerable patients, but it also started using Remdesivir in an outpatient setting in its infusion clinic for the first time ahead of Christmas.

"The bigger message is if you're vaccinated and boosted, the chances of you having a poor outcome from COVID at all is pretty low," Duggan said.

While the CDC previously announced a preference for mRNA vaccines among those on the market, Novavax announced Friday it submitted its final data package on its COVID-19 vaccine to the FDA, expecting to request an emergency use authorization in a month.

The company describes it as a protein-based vaccine, rather than teaching your body to make the protein. The company explains it was created using nanoparticle technology. The protein itself forms into nanoparticles, and the vaccine uses the company's own adjuvant, which the company said helps boost the immune system. Unlike mRNA vaccines on the market, this vaccine candidate does not require storage at extremely low temperatures.

The CDC recently advised against cruise travel regardless of vaccination status. The agency elevated its travel health notice to level 4, the highest level. The agency said the chance of getting COVID-19 on a cruise ship is very high.

Cruise Lines International Association said it is disappointed and disagrees with the decision, but notes it is committed to working with the agency in the internet of public health and safety. The organization points to protocols in place, severity of cases and the numbers on ships compared to the total on board.

"The protocols are working. We have a situation that needs to be managed, but it's being managed," said Brian Salerno, the organization's senior vice president of maritime policy.  "And just like the rest of society that is just grappling with how do we keep our economy working, protect people, and avoiding just shutting down, I think we can do that. And I think we can do that extremely effectively. We've demonstrated we had that ability over the course of the resumption."

Meanwhile, the rise in cases has led to a pivot in return-to-school plans after the holidays.

The University of Miami announced it would use remote learning the first two weeks of class and require proof of a negative COVID-19 test ahead of returns to campus. Duke University and Michigan State University announced similar measures.

At the K-12 level, Washington, D.C., public schools said students and staff will be required to show proof of a negative test no earlier than the day before return.

"If your child develops new potential COVID symptoms, even if you just got them tested ahead of returning to school on Monday, that child needs to stay home until they get a negative test result. Same for adults. Right now where people are having new symptoms and they think it's the cold, they think it's the flu, there is in fact a very good chance that it is COVID," said Chicago Department of Public Health Commissioner Dr. Allison Arwady.