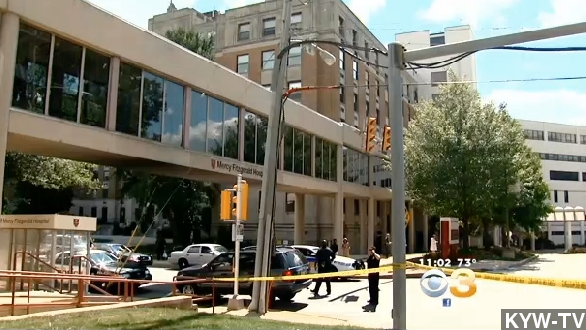 By Ben Lawson
July 25, 2014
A doctor is in an odd spot with his employer after he violated hospital policy by bringing a gun to work and then shot a patient in self-defense.
SHOW TRANSCRIPT

It was a terrifying scene at a Pennsylvania hospital, where authorities say a doctor shot one of his patients three times in self-defense after the patient shot and killed a hospital employee.

The Philadelphia Inquirer reports Dr. Silverman had a permit for the gun and it was completely within the law for him to have it inside his office.

However, Mercy Fitzgerald Hospital, where the incident occurred, has a strict policy that "Employees are prohibited from bringing firearms or explosives of any kind into the workplace."

Still, following the shooting, many say Silverman saved lives. Delaware County District Attorney Jack Whelan announced Friday that Plotts had 39 bullets with him and would likely have continued shooting if Silverman had not acted. (Via The Delaware County Daily Times)

Fox News reports charges against Dr. Silverman are unlikely: "I just got off the phone with Yeadon Police Chief Donald Molineux who hailed Dr. Silverman, in fact, as a hero. He believes the doctor acted in self-defense."

Mercy Fitzgerald Hospital has not yet made a statement on the incident so it is unclear if Dr. Silverman will face disciplinary actions for violating hospital policy.

Christian Science Monitor points out that this situation enforces a common argument in the gun rights debate. "For gun rights activists, the situation – an armed doctor stops a rampaging patient in a gun-free zone – embodies both the public safety ironies around gun control and also points to what they argue is the real culprit in most public violence in the US: unchecked mental illness."

The Mercury reports that Plotts did have a long history of mental health issues but the district attorney claims he was still aware his actions were wrong.

A writer for Shall Not Be Questioned, a blog run by self-proclaimed "2nd Amendment activists," argues "You'd think this would make it clear to the other side that the problem lies with our mental health and legal systems."

The motive in this shooting has not yet been announced but District Attorney Whelan told the Philadelphia Inquirer that Plotts had expressed anger at the hospital's gun policy in the past.