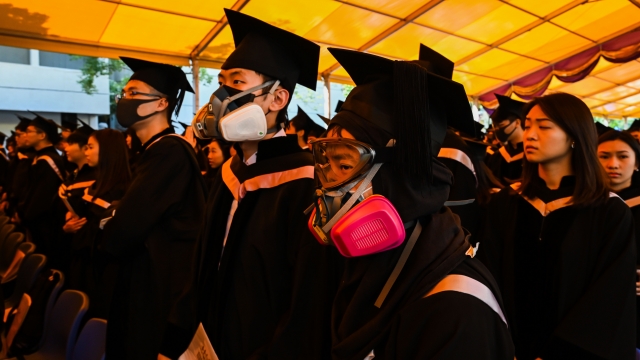 A Hong Kong university cut a graduation ceremony short on Thursday after students showed up wearing protest masks with their caps and gowns.

In an effort to try and control pro-democracy protests that have rocked the city for months, Hong Kong's government banned demonstrators from wearing masks in October.

The vice president of the university's student union told NBC News the students were "defending their rights to freedom of expression and speech."

As they walked to their graduation ceremony venue, the students reportedly chanted and held banners, calling for the Hong Kong government to respond to all of the protesters' demands. Those demands include universal suffrage and an independent inquiry into police conduct.

University officials held the graduation ceremony as planned; but the event was abruptly cut short after the degrees were handed out. No students were arrested at the ceremony.