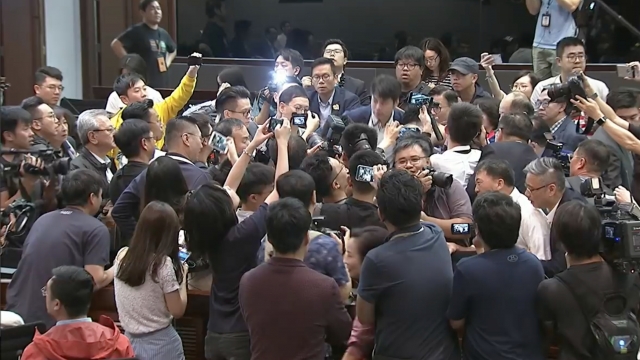 A debate over a new extradition law in Hong Kong's parliament ended in chaos on Saturday, with lawmakers fighting each other on the floor.

The legislation would allow the government to extradite people suspected of crimes to places Hong Kong doesn't have extradition agreements with, like mainland China, for trial.

Hong Kong's top official, Carrie Lam, says it's necessary to close a loophole in the current legislation. She mentioned a recent case of a Hong Kong man accused of killing his girlfriend while on vacation in Taiwan, then running back to Hong Kong. The two regions don't have an extradition deal, so there's a chance he could go free.

But opponents argue the law could force Hong Kong citizens to be tried under China's communist law, and that's why the legislation is so controversial.

Hong Kong and China have a unique and strained relationship. Hong Kong is technically part of China, but under the "One Country, Two Systems" policy agreed on in the early 1980's, Hong Kong has operated under its own legal and economic systems.

Protesters marched against the proposed law last month in what's been described as one of the largest protests since 2014. Tens of thousands took to the streets then in support of free democratic elections as part of the so-called Umbrella Movement.