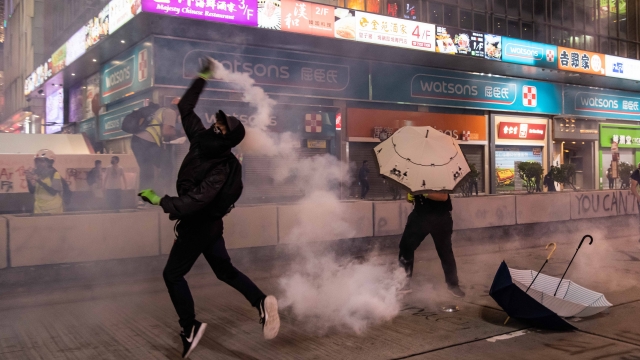 SMS
Hong Kong's Economy Takes A Major Hit Amid Continuing Demonstrations
By Peter Hecht
By Peter Hecht
October 29, 2019
Hong Kong is facing a financial crisis amid ongoing protests that have morphed into a pro-democracy challenge to Chinese authority.
SHOW TRANSCRIPT

Hong Kong's protests are taking an economic toll. After seven months of demonstrations, including violent clashes challenging Chinese authority over the semi-autonomous city, Hong Kong is in a financial crisis. A recession is looming.

Those protests, which started March 31 over a controversial extradition bill, have morphed into a pro-democracy movement with little sign of weakening.

Exports for the third quarter ending in September were down by 7%. Tourism was off by 37%. Business was down significantly at hotels and retail centers, attributed to the protests as well as a slowing Chinese economy.

Hong Kong's embattled chief executive Carrie Lam, faced with protesters' demands for her resignation, described the economic situation as "very grim." She said Hong Hong, a major financial center for Asia, expects to end the year with its economy shrinking.

"It's estimated that we will very likely see negative growth for the full year of 2019, which means we won't be able to achieve our projected goal of 0% to 1% in growth — that has already been downgraded. So, the current situation is highly serious."

Amid the Hong Kong protests, patronizing businesses from upscale malls to small shops is becoming a political decision. Protesters are awarding color codes to businesses, based on loyalty to the movement.

If a business is tagged with yellow, a color code shared on social media, that means it supports the pro-Democracy movement. The color symbolizes royalty or courage in Chinese culture, a very positive endorsement.

That's not the case with blue. Businesses given that color code are seen as pro-China. Besides losing customers, many have been vandalized.

Lam insists Hong Kong's economic downturn isn't about political choices, it's about violence — which she says cannot be appeased.

"The situation we are now facing is anti-government violence, so the most effective solution is to tackle the violence head on. For the government to resort to measures that will appease the violent rioters, I don't think that is a solution. And I feel that many of the Hong Kong people, yes, they may have many have some unhappiness and grievances about the government policies, about the government handling of this major crisis, but the time now is really to put in all our efforts to say no to violence."

To get a sense of the severity of Hong Kong's economic challenges, the South China Morning Post surveyed analysts and business leaders about the protests' impact on a three-day holiday weekend the first week of October.

They estimated that losses that weekend capping the Chinese "golden week" could top $242 million, largely due to hotel and retail losses from plunging tourism. The city's rail network, crippled by the protests and vandalism, accounted for nearly one-fifth of the falloff due to lost ticket revenue.

Hong Kong's tourism chairman said: “The market outlook is dim because there’s still no sign of the protests easing. So far, nobody can tell us when this social unrest will die down, not even the government.”

Hong Kong economist Andy Kwan says the impact of the protests, for now, "is only short-term." But if they undercut long-term economic confidence, he said, "That could lead to a currency crisis in Hong Kong and (also) seriously cripple China's economy."