Hong Kong's British Past Shapes Its Tense Present With China 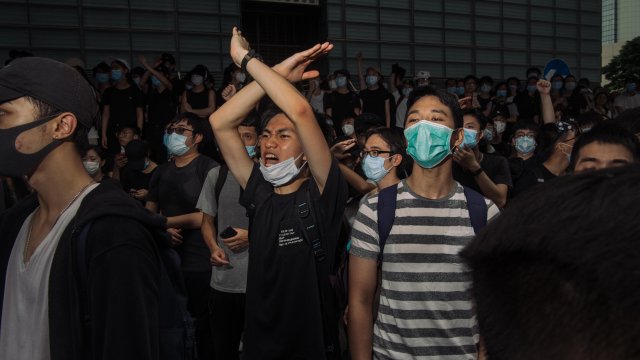 SMS
Hong Kong's British Past Shapes Its Tense Present With China
By Matt Picht
By Matt Picht
June 13, 2019
Hong Kong's fractious relationship with its parent state of China has a lot to do with the city's transition away from its colonial British rulers.
SHOW TRANSCRIPT

The city of Hong Kong has a tense relationship with its parent state of China. That's thanks in part to its complex and colonial history.

Hong Kong was taken over by the British Empire during the mid-1800s, and developed and flourished as a Western market-based economy. The U.K. eventually agreed to hand the territory back in 1997, but under a special agreement with China known as "one country, two systems."

Victoria Tin-bor Hui, an associate professor at the University of Notre Dame, told Newsy: "For the UK, it was important for them that we have to return Hong Kong but it's at the same time give people some kind of protection. The whole idea was that at the time, according to Deng Xiaoping is that after 50 years, China will catch up to Hong Kong, and then Hong Kong, we no longer need any protection."

Today, China and Hong Kong are part of the same country: the People's Republic of China. But outside of foreign affairs and national defense issues, Beijing considers Hong Kong a Special Administrative Region, which gives the city a great deal of independence.

The arrangement has allowed Hong Kong to develop into a global financial powerhouse while still maintaining its political relationship with Beijing. Hong Kong's success has been valuable for the whole country as well: nearly two-thirds of China's foreign investment in 2014 came through Hong Kong.

But Hong Kong's independence has increasingly grated on mainland China: the city is one of the few places on Chinese soil that can still routinely commemorate the 1989 Tiananmen Square protests.

"Beijing has done so much to erase any memory of Tiananmen," Hui said. "But in Hong Kong, people continue to insist that we don't want to forget. And this is seen as a threat to to the CCP in Beijing."

Recent efforts from Beijing to undermine Hong Kong's independence have prompted mass demonstrations in the city. The 2014 Umbrella Movement was born from the mainland's effort to exert more control over Hong Kong's leadership selection process, while recent demonstrations stem from fears that Beijing would exploit changes to the city's extradition laws.

"One country, two systems" is only supposed to be in force until 2047 — a date many of the younger protesters marching against Beijing's influence will be around to see.

Hui told Newsy, "For them, 2047 means that they will be in the prime age. And so they have to fight for the future and defend their freedom. ... A lot of people when they went to the street on Sunday, they said, 'We don't think that we can change this, we can change the bill. But we don't want to go down without a fight.'"