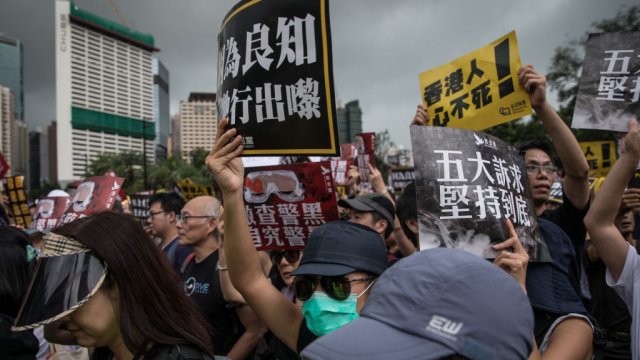 Hong Kong's massive pro-democracy march has given the city a moment of respite from the escalation between police and protesters.

The march from Victoria Park to the city's legislature on Sunday was largely peaceful, without any of the violence that has marred previous demonstrations. The city's police force kept a low profile during the protest; no tear gas was fired over the weekend, a rarity in the 11 weeks that protests have been staged.

The restrained march comes after an airport occupation by protesters descended into violence. China's ruling government, which technically runs the semi-autonomous city, is now using images of the violence in state-run media to discredit Hong Kong's protest movement as a violent, foreign-backed revolt. 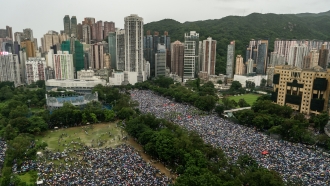 Sunday's march could help counter those images, both in scope and in conduct. Organizers estimate around 1.7 million people turned out for the protest. That's a sizable show of public support in a city of around 7.5 million.

And the restrained behavior at the protest could help defuse tensions that may have escalated the conflict. Mainland China hasn't made any serious moves toward cracking down on Hong Kong, but it has been amassing troops and conducting crowd control drills in nearby Shenzen.

In a media briefing over the weekend, Hong Kong's police force said they have control over the situation and aren't preparing for military intervention from the mainland. One officer told reporters the city needs political solutions in order for the protests to end.