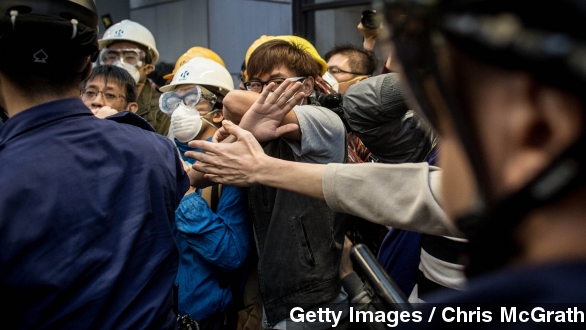 After largely losing the attention of most of the world, the protests in Hong Kong have heated up again as demonstrators try to keep the movement from petering out.

Al Jazeera reports the number of protesters has surged, and the student protesters have adopted a more confrontational strategy by laying siege to the government headquarters, causing it to briefly shut down.

The violent clashes coincided with China's decision to prevent some British members of Parliament from visiting the island on a fact-finding mission and accusing them of meddling in China's internal affairs. (Video via ODN)

Sir Richard Ottaway told the BBC, "Personally, I think the whole episode is an affront to the free men and women of the world, and that's why it can't go uncommented on."

The U.K. and China have had an occasionally fraught relationship, and diplomatic ties between the two were still recovering from a 2012 meeting between Prime Minister David Cameron and the Dalai Lama, which angered China. (Video via Templeton Prize)

The U.K. has a unique stake in Hong Kong's democratic process because the island used to be a British colony, and the handover from the U.K. to China in 1997 had some conditions.

Back then, both sides agreed Hong Kong would be guaranteed the right to govern itself — so China's decision to screen candidates for Hong Kong's top office in 2017 really touched a nerve. (Video via TVB Pearl)

The members of Parliament who were barred from Hong Kong will now look to call a special meeting of the Parliament to discuss their findings, although Cameron has already called the move a mistake through his spokesperson.

The members of Parliament are looking to hold a debate over their findings Tuesday.