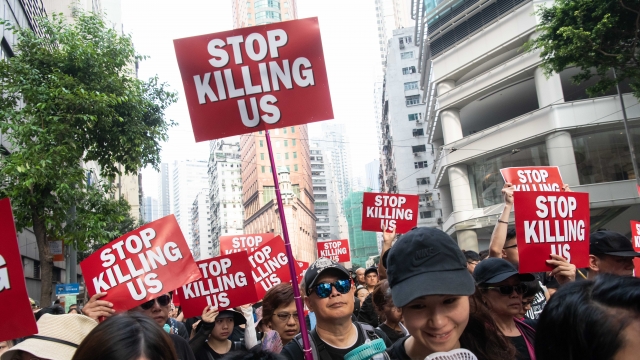 Hong Kong's controversial extradition bill is on ice, but hundreds of thousands of people still took to the streets Sunday to demand the bill be fully canceled.

The protests forced Hong Kong Chief Executive Carrie Lam to suspend debate on changes to the city's extradition laws. But protesters say they’re not convinced the government has given up on making those changes.

Newsy spoke with some of the demonstrators marching against the government one day after the bill was pulled. The incident has inflamed a broader mistrust between Hong Kong's government and its people.

The police response to the protests was a major point of contention for many demonstrators. More than seventy people were hospitalized with injuries after Hong Kong's security forces used tear gas and rubber bullets against the crowds.

The extradition controversy is part of a larger struggle between the city and its nominal parent state of China. The "one country, two systems" model means Beijing is supposed to give Hong Kong a fair degree of autonomy: but protesters worry the city's independence is being slowly eroded by moves like the extradition bill.