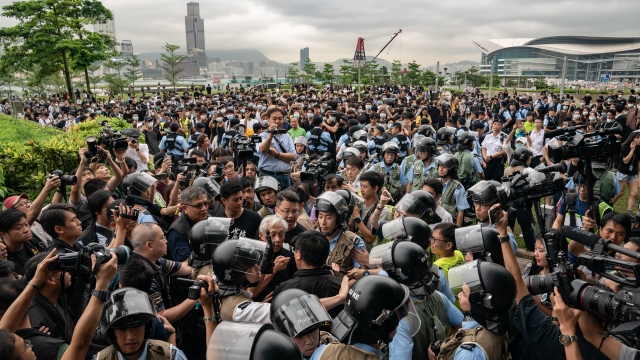 SMS
Hong Kong Protesters Speak Out Against Extradition Legislation
By LeeAnne Lowry
By LeeAnne Lowry
June 13, 2019
Here's a look at why a massive number of people are protesting in Hong Kong.
SHOW TRANSCRIPT

Pro-democracy protester Matthew Shiu said, "My name is Matthew, and we're here because we have kids and they're pushing extradition laws in Hong Kong, which is going to be pretty harmful to our legislation system. And from that perspective, we're here to support the absence of that and a better future for our kids."

Protesters have been taking to the streets of Hong Kong to oppose proposed extradition legislation.

Another pro-democracy protester said, "It boils down to a display of people power in Hong Kong. A display, in particular, of young people power! ... The young have every right to express their feelings, their anger, their frustration, their resentment in any way they want, because this is their Hong Kong, their future."

The government-backed bill would allow China to extradite suspects from Hong Kong. Critics say the legislation would undermine the city's semi-autonomous legal system.

Emily Lau, former chair of the Hong Kong Democratic Party, said: "We were a British colony. And when the British government departed in 1997 they deliberately crafted the legislation in its current form, which Carrie Lam wants to amend, that we cannot send fugitives to China. And some people would call that a gap or a loophole. And people like Chris Patten would say that is a protection; that is a firewall which separates Hong Kong from mainland China under One Country Two Systems. And what Carrie Lam wants to do is to drive a truck through this firewall. And what will we get? It's one country one system. We will be reduced to just another Chinese city."

Chinese artist Ai Weiwei said: "They secretly detained lawyers, they have detained those people who put things on the internet. This is a society which isn't a rule of law. They don't have a judicial system. So for Hong Kong ... [it's] becom[ing] a front line to protect Hong Kong people's rights not to let this happen."

But Hong Kong's chief executive says the bill is necessary to plug loopholes in the existing system.

Hong Kong Chief Executive Carrie Lam said: "There's no question of us ignoring views expressed in society. But Hong Kong has to move on. There are severe deficiencies and gaps in our existing system to deal with, cross-border crimes and trans-national crimes. There is sort of a very difficult area to understand, why Hong Kong cannot have any mutual legal assistance on criminal matters with our closest neighbors that is mainland China, Taiwan and Macau. So we have to sort of pluck that loophole and rectify the deficiency for the long term benefit of Hong Kong because nobody wants Hong Kong to be a fugitive offenders' haven."