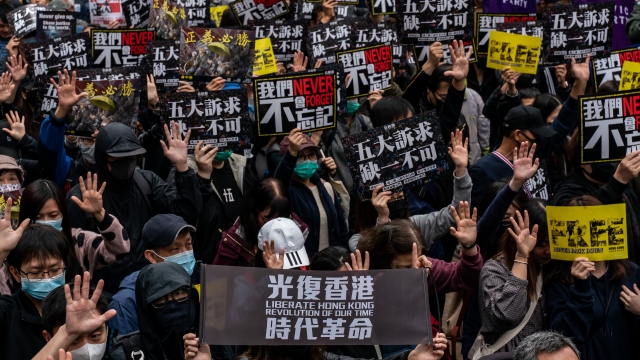 SMS
Tens Of Thousands Gather For New Year's Day Protest In Hong Kong
By Katherine Biek
By Katherine Biek
January 1, 2020
Police withdrew their authorization for the rally after some protesters clashed with officers.
SHOW TRANSCRIPT

Tens of thousands of pro-democracy demonstrators in Hong Kong gathered together for a New Year's Day protest Wednesday.

Hong Kong officials originally authorized the rally to take place. But after some protesters clashed with police, that permission was quickly withdrawn. At least five protesters were arrested for carrying weapons, including hammers and batons.

Police said they fired tear gas after some "thugs" set fires, damaged storefronts and threw bricks and petrol bombs. But the rally's organizers denied that report, saying the police were just trying "to separate Hong Kongers."

Demonstrations have been ongoing for over six months, now. They were sparked by a controversial extradition bill which was eventually scrapped. But after that, demonstrators pushed for other demands, including: universal suffrage, an independent inquiry into police conduct, amnesty for protesters who have been arrested and an end to characterizing demonstrations as "riots."

Dozens of lawmakers and dignitaries from 18 countries urged Hong Kong leader Carrie Lam to address "the grievances of [the] Hong Kong people" in an open letter sent Tuesday.

Hong Kong's government dismissed the letter as "biased and misleading." It said Wednesday that its first priority is to "stop violence and restore social order as soon as possible."