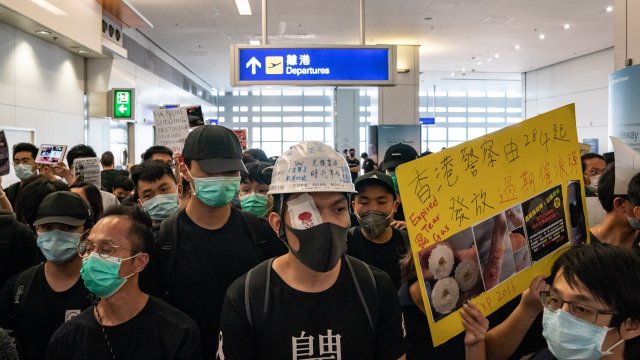 Hong Kong's protest movement shut down the city's airport for the second day in a row, eventually leading to violent scuffles between police and protesters.

Demonstrators flooded the departure gates of Hong Kong International Airport, blocking passengers from getting on their flights. The airport was eventually forced to suspend many of its scheduled flights, leading to some tense confrontations between passengers and protesters.

The protests grew more chaotic as the night went on. At least two people were held captive after they were accused of being undercover police officers. One man was medically evacuated after spending hours trapped in the crowd; the other was identified as an employee of China's state-run newspaper, China Daily. 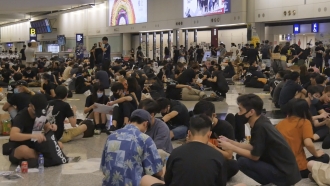 Hong Kong's Continued Protests Are Taking A Toll On The Economy

Police officers deployed rubber batons and pepper spray on the crowd, leading to several violent arrests. Authorities later secured a court injunction to clear out the airport; the majority of the protesters had left the terminal by that point.

This is the latest escalation of the demonstrations against Hong Kong's local government that started back in June. Protests initially focused on how much influence China's central government holds on the city, but have shifted to denouncing alleged brutality by Hong Kong's police force and demanding more democratic freedom in the city.

China's central government, which technically controls the city but has granted it some autonomous rule, has blamed foreign influence for the protests. The airport protests have sparked fears Beijing might take a more direct role in suppressing the protest movement.