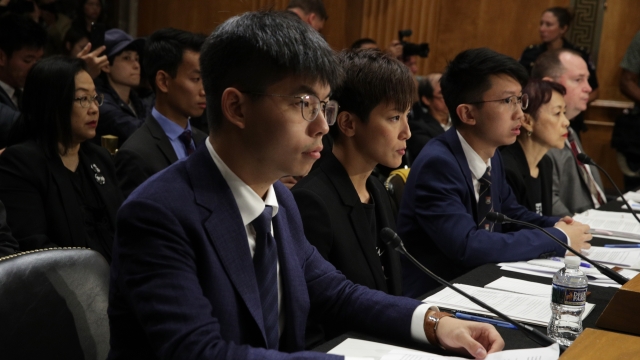 Leaders of Hong Kong's pro-democracy protests are urging U.S. lawmakers to pass legislation that could put significant financial pressure on the city.

Demonstrations in Hong Kong have been happening for nearly four months. It was initially triggered by a bill that would've allowed China to extradite suspects from Hong Kong. That bill has since been withdrawn, but the protests have grown to include issues like police brutality and calls for Hong Kong's leader to step down.

The group pushed U.S. Congressional leaders on Tuesday to pass the Hong Kong Human Rights and Democracy Act. Activist Denise Ho said, "This is not a plea for so-called foreign interference. This is a plea for democracy."

The legislation would require Washington to annually assess whether or not Hong Kong is respecting human rights and the law. If not, the U.S. could revoke Hong Kong's special status as a U.S. trading partner.

Hong Kong is currently protected from the U.S., China trade war under the U.S.-Hong Kong Policy Act of 1992.

But if its special status was overturned, Hong Kong would be vulnerable to all of the U.S.'s punitive tariffs on China. On top of that, the U.S. could impose sanctions and other penalties against those who are undermining the city's autonomy. And it would make it difficult for Hong Kong residents to apply for U.S. visas.

Protest leader Joshua Wong told the congressional hearing, "Beijing shouldn't have it both ways, reaping all the economic benefits of Hong Kong's standing in the world while eradicating our sociopolitical identity."