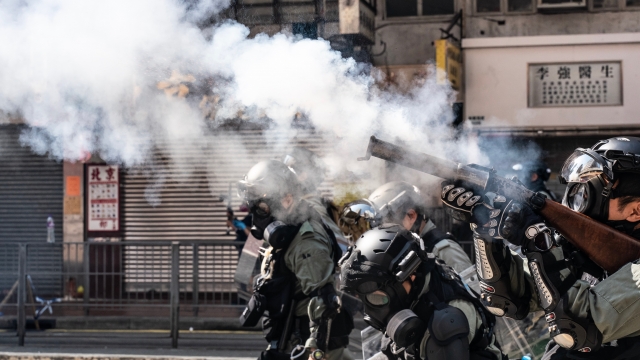 SMS
Hong Kong Protest Descends Into Chaos As Man Is Lit On Fire
By Katherine Biek
By Katherine Biek
November 11, 2019
Protesters were caught on camera pouring flammable liquid on a man and setting him on fire. The man is reportedly a pro-Beijing supporter.
SHOW TRANSCRIPT

At least two men are in critical condition after anti-government protests in Hong Kong once again turned violent on Monday.

Hong Kong police confirmed one of its officers shot a 21-year-old protester in the torso with a live round. Police say the officer fired to stop the protester from grabbing his gun. A CNN reporter spoke to a witness at the scene.

CNN's Will Ripley: "Tell me why it's not fair."

Witness: "I didn't see any danger that will cause harm to that police and we were just leaving; we were running. We were trying to escape from that scene but he still shot at us."

In a separate incident, protesters were caught on camera pouring flammable liquid on a man and setting him on fire. Multiple outlets report the man is a pro-Beijing supporter who'd been arguing with the protesters just before the incident.

Mondays protests were part of a citywide general strike that was organized after a student died from injuries sustained from falling off a parking garage during a police operation.

Additionally, Hong Kong police says it plans to investigate an officer who was filmed driving his motorcycle into a crowd of protesters. That officer has since been suspended.

The protests, which have been going on for more than five months, currently show no signs of slowing down. Although Hong Kong's government has withdrawn a controversial extradition bill that sparked the protests, demonstrators still have other demands, including universal suffrage and an independent inquiry into police conduct.