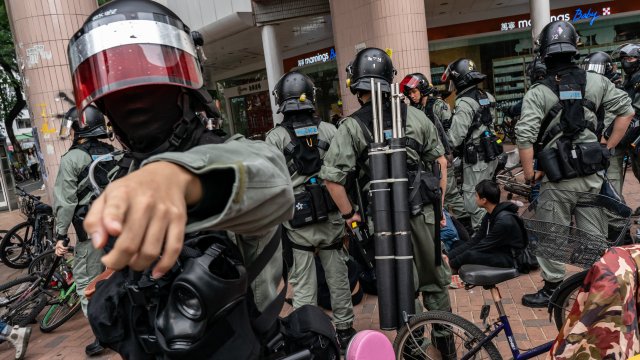 Police in Hong Kong are reportedly considering expanding their arsenal. The South China Morning Post reports the Hong Kong Police Force is looking into buying stun guns and net guns for its officers amid the unrest in the city.

A source told the Post the police force believes these nonlethal weapons are safer, both for suspects and the police.

The Hong Kong Police Force did not deny it is considering purchasing these weapons. It sent a statement to Newsy saying it would "consider all measures that could enhance operational efficiency." The statement went on to say the police force is constantly reviewing its options for equipment and initiatives "under the increasingly difficult working environment."

But the mere consideration of police using electrical weapons has drawn criticism. A spokesperson for Hong Kong Human Rights Monitor said adding the weapons is "unnecessary." They added, "Once electric guns are introduced in Hong Kong, it is helpless to solve social problems and even increased hostility, thus worsening the relations between the police."

The human rights group also referenced the controversies in western countries involving police use of stun guns. For instance, a Reuters investigation found Tasers have contributed to more than 1,000 deaths in the U.S.