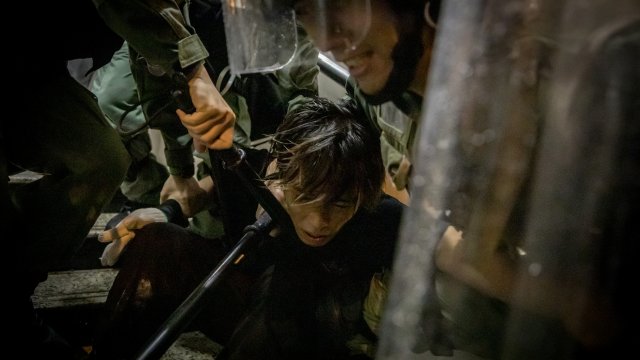 Hong Kong police are coming off a couple of firsts in their continued clash against protesters Sunday. For the first time, police used water cannons against protesters. Six officers also drew their guns, one taking it a step further, firing a "warning shot to the sky."

According to a statement from Hong Kong police, the six officers were "surrounded, under attacks and facing threats to life." The threats allegedly came from a break-off group of protesters who were part of a peaceful protest earlier in the day.

Police said protesters broke off blocked roads, built barriers, threw bricks, molotov cocktails and other items at police. According to a statement, the force arrested 36 protesters, one being a 12-year-old, for offenses including unlawful assembly, possession of offensive weapon and assaulting police officers.

Police said 15 officers were injured and hospitalized. The force tweeted its commissioner's reaction to the clashes saying, "Mr. Lo expressed strong anger and condemnation against the reckless, violent and unlawful acts committed by the rioters. The Police Force will strive to investigate all violent acts that have caused serious and even life-threatening injuries."

More demonstrations are expected from protesters. They started about three months ago over a now-shelved extradition bill. Since then, police have arrested more than 700 people.