Hong Kong Once Again Warns Against Foreign Interference In Protests 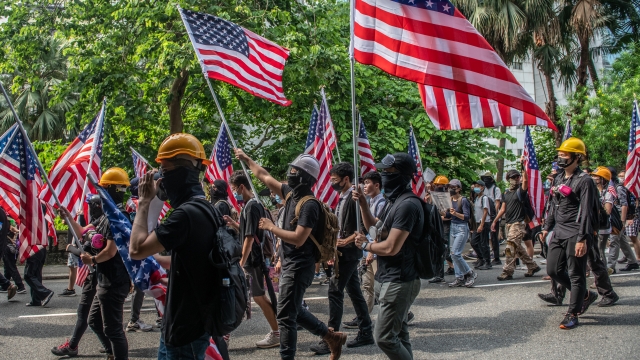 Hong Kong's government issued another warning about foreign interference after anti-government protesters marched on the U.S. consulate in a bid to get help from the Trump administration.

Things turned violent later in the day when Hong Kong police used tear gas on demonstrators who vandalized a subway station, smashed its windows and set a fire near one of its entrances.

Meanwhile, Chinese state media on Monday once again alleged that foreign forces were behind the Hong Kong protests, and warned that any attempt to separate the city from the mainland "will be crushed."

Beyond trying to get President Trump's attention, the point of the march was to also call on U.S. lawmakers to pass the Hong Kong Human Rights and Democracy Act.

If passed, the legislation would require Washington to annually assess Hong Kong's status as a U.S. trading partner, as well as impose sanctions and other penalties against those who are undermining the city's autonomy.

Senate Minority Leader Chuck Schumer's already said the Hong Kong bill is a priority for Democratic lawmakers coming back from their holiday recess.