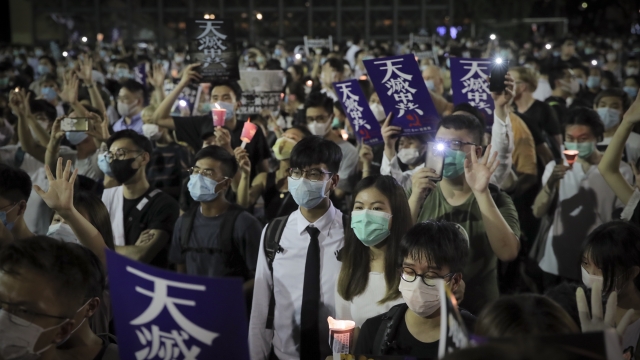 Pro-democracy lawmakers attempted to disrupt the proceedings, and most didn't even vote out of protest. But the legislature's pro-Beijing majority backed the measure, giving it enough yes votes to pass.

Under the new legislation, which will go into effect June 12, Hong Kong citizens who don't show respect for the anthem could be fined almost $6,500 and be sent to prison for up to three years.

The bill's critics see it as a way for China to tighten its control over the semi-autonomous region. They also say it infringes on the liberties and freedoms guaranteed to Hong Kong citizens under the "one country, two systems" model.

China's already in the process of drafting a national security law for Hong Kong that will strengthen "enforcement mechanisms" to prevent and stop all activity in Hong Kong aimed at overturning the Chinese government.

The vote on the Chinese national anthem bill fell on the same day as the 31st anniversary of the Tiananmen Square massacre. Thousands of Hong Kong residents gathered Thursday to commemorate the occasion at a candlelight vigil, defying orders by local police who banned the event over coronavirus concerns.