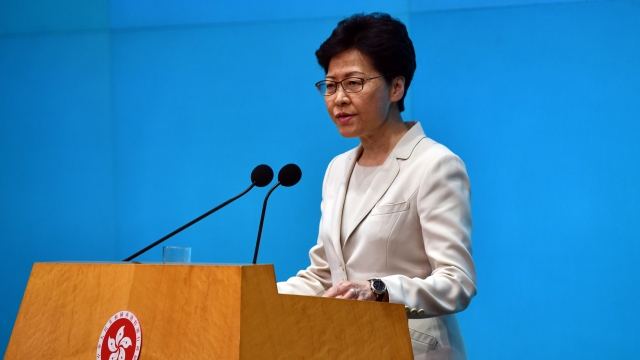 SMS
Hong Kong Leader Says Extradition Bill The Sparked Protests 'Is Dead'
By Katherine Biek
By Katherine Biek
July 9, 2019
The chief executive did not go so far as to completely withdraw the bill, though.
SHOW TRANSCRIPT

The proposed legislation — which would have allowed China to extradite suspects from Hong Kong — has sparked multiple weeks of protests.

Lam previously put the bill on hold back in June. On Tuesday, she took things a step further, saying that the government's work on it had been a "total failure."

"There are still lingering doubts about the government's sincerity or worries that the government will restart the process in the Legislative Council. So I reiterate here, there is no such plan. The bill is dead," Lam said during a press conference Tuesday.

While the bill being 'dead' may sound final, that may not be the case.  Following Lam's remarks, critics reiterated their demand for the bill to be formally withdrawn to prevent it from being fast tracked through the legislative process in the future.

Instead, she's essentially keeping the bill in limbo by saying it'll die when the current legislative term ends in 2020. Though it's worth noting that since the bill had already been suspended, it was always going to expire then unless lawmakers chose to pick it back up at some point.

"What she said today is just too little, too late and just too phony. She keeps using political rhetoric thinking that that alone could appease this society. But this population in Hong Kong has become unforgiving," pro-democracy lawmaker Claudio Mo told a CNN reporter.

Lam resisted protesters' demands to step down Tuesday, saying that it's "not a simple thing." She also refused to call for an independent investigation into allegations that police have been using excessive force on demonstrators.