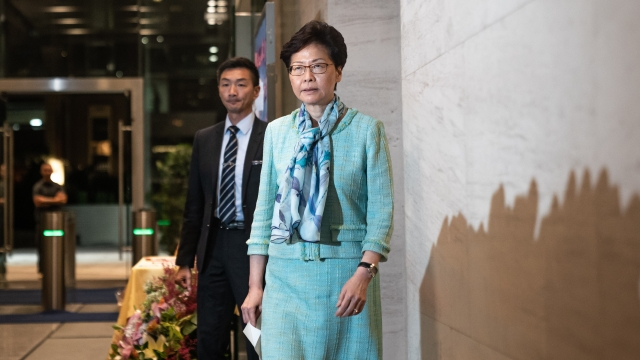 SMS
Hong Kong Leader Forced To Abandon Speech After Protests
By Katherine Biek
By Katherine Biek
October 16, 2019
Wednesday was the first time Hong Kong's Legislative Council had met for a regular session since protesters stormed the building back in July.
SHOW TRANSCRIPT

She attempted to give her speech several times. But pro-democracy politicians kept disrupting her, so Lam ultimately walked out, forcing the legislative session to abruptly end.

It marked the first time Hong Kong's Legislative Council had met for a regular session since protesters stormed the building back in July.

If Wednesday's session had continued, lawmakers would have had the opportunity to fully withdraw a controversial extradition bill that initially sparked protests in the region earlier this year. Lam announced she was withdrawing the bill last month, but certain steps have to be taken within the legislature for everything to be official.

After she was unable to give her speech in person, Lam released a recorded version of it. She highlighted a number of economic measures being taken by the government, but gave no ground to protesters.

Those protesters want Lam to step down. She has so far rejected those calls.