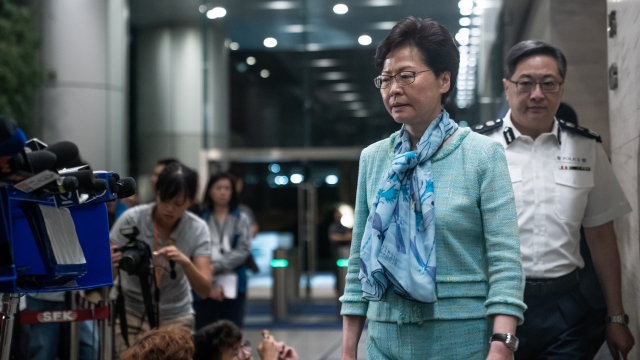 SMS
Carrie Lam Says She's Never Tried To Resign As Hong Kong's Leader
By Katherine Biek
By Katherine Biek
September 3, 2019
Her comments came after she was heard in a leaked audio recording saying she would quit if China would allow it.
SHOW TRANSCRIPT

Hong Kong's leader Carrie Lam says she never tried to resign after she was heard in a leaked audio recording saying she would quit if China would allow her to.

In a recording of a private meeting cited by Reuters, Lam told a group of business leaders that it was "unforgivable" that her actions had sparked the months of anti-government protests in Hong Kong.

Demonstrators began protesting over a now-suspended extradition bill that would've allowed China to extradite suspects from Hong Kong. Lam was the one who introduced the bill, and protesters want her to resign.

Lam can be heard saying in the recording, "If I have a choice, the first thing is to quit, having made a deep apology."

On Tuesday, Lam did not deny the contents of the recording, but instead tried to clarify her comments.

"In a private session, I just attempted to explain that as an individual given the very difficult circumstances, it was an easy choice to leave. But I told myself repeatedly in the last few months that I and my team should stay on to help Hong Kong," Lam told reporters.

Following the leaked recording, a spokesman for China's Hong Kong affairs office reiterated Beijing's support for Lam. But Chinese officials also warned the government was prepared to intervene if the violent protests continue.