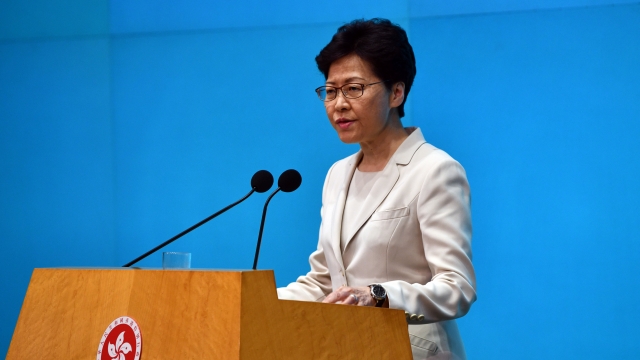 The bill, which was introduced by Lam's government back in April, would have allowed China to extradite suspects from Hong Kong.

After more than a million people turned out to march against the bill in June, Lam suspended it.

That suspension allowed Lam to keep the bill in limbo by saying it would die when the current legislative term ends in 2020. But that didn't appease protesters, who still demanded she formally withdraw the bill to prevent it from being fast-tracked through the legislative process in the future.

Protesters have also been calling for democratic reforms and for an independent investigation into allegations that police have used excessive force on demonstrators. So it's unclear if Lam's decision to withdraw the bill will ease tensions in the city.

While Lam pledged to talk directly with demonstrators, she also said her government's "top priority" is to stop the violent protests.

"Irrespective of our grievances, or the depth of discontentment towards the Government, we cannot agree or accept that violence is a solution to our problems," Lam said in her statement.