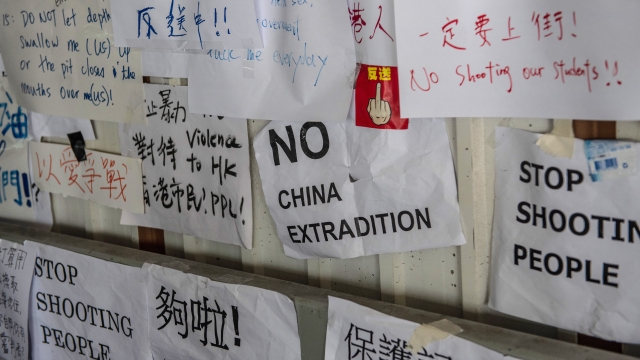 Hong Kong Chief Executive Carrie Lam said, "After repeated internal deliberation over the past two days, I now announce that the government has decided to suspend the legislative amendment exercise. We start our communication with all sectors of society, do more explanation work, and listen to different views of society. I want to stress that the government is adopting an open mind to heed comprehensively different views in society towards the bill."

Lam indefinitely suspended a controversial extradition bill on Saturday. But protesters say it isn't enough, and that the government needs to completely throw out the legislation.

Lam said the decision was made because of violence that broke out Wednesday. Protests outside Hong Kong's government complex had been mostly peaceful up until then, when protesters clashed with police.

The now suspended legislation would allow China to extradite suspects from Hong Kong. It would not guarantee a fair trial.

Critics say that legislation could be used to target political enemies and would undermine the city's semi-autonomous legal system. But a Hong Kong Executive Council leader said protesters don't understand the bill.

Bernard Chan said, "But obviously, I think it's very unfortunate: I think most people were confused with the intention. They thought the bill is to really focus on China alone - in fact it is not. The Extradition Amendment is to deal with a case-by-case extradition arrangement with the rest of the world, not just China alone."

The protests aren't over. A previously scheduled march is still expected to happen Sunday.