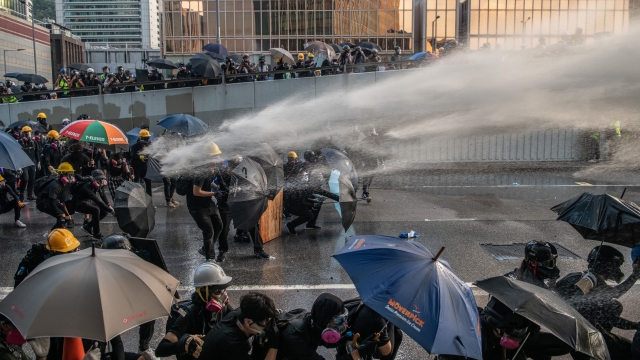 Among other things, protesters called on U.S. lawmakers to pass legislation that would require Washington to annually assess Hong Kong's trade status.

Hong Kong protesters took to the streets on Sunday for a 15th consecutive week of demonstrations.

Back in June, the demonstrations were triggered by a bill that would've allowed China to extradite suspects from Hong Kong. The city's leader Carrie Lam withdrew it almost two weeks ago, but there are still unmet demands. Protesters want Lam to step down, as well as an inquiry into police brutality, the release of arrested demonstrators and more domestic freedoms.

Last week, tens of thousands of protesters marched near the U.S. consulate to demand support from President Donald Trump. The push continued this week, as some pro-democracy demonstrators waved American flags, calling on U.S. lawmakers to pass legislation that would require Washington to annually assess Hong Kong's status as a U.S. trading partner, as well as impose sanctions and other penalties against those who are undermining the city's autonomy.