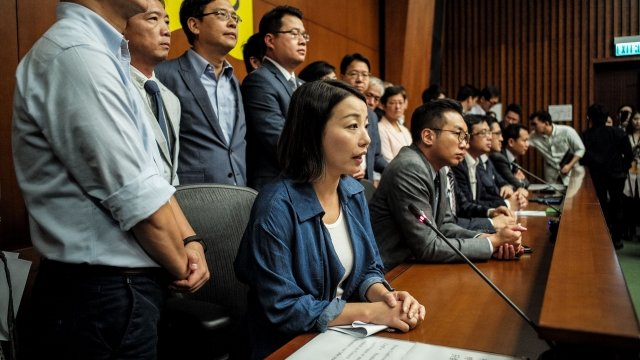 Four pro-democracy legislators were disqualified from the Hong Kong Legislative Council. Why? Because of the way they delivered their oaths last year.

All four legislators were pro-democracy activists, and the decision to have them removed from the council is raising fears about China's growing influence in the region.

Activist and Hong Kong's youngest-ever legislator Nathan Law started off his oath by saying it was only a political tool. He was also accused of using a rising intonation while saying the Cantonese word for "China" as if to doubt and disrespect the country.

The court's judgment stated, "By adopting a rising intonation, Mr. Law was objectively expressing a doubt on or disrespect of the status of the People's Republic of China as Hong Kong's legitimate sovereign country."

Fellow activist and disqualified lawmaker Leung Kwok-Hung brought a yellow umbrella to the oath-taking ceremony — a symbol of the pro-democracy movement and 2014 protests. The court said his oath lacked dignity and solemnity.

Both Lau and Yiu were allowed to retake their oaths, but the court still ruled to disqualify them.

These disqualifications come almost one year after the firing of pro-independence activists Sixtus Leung and Yau Wai-ching. Both had declined to take their oath and also displayed banners that read "Hong Kong Is Not China." The duo was not allowed to retake their oaths.

Sixtus Leung notably also pronounced China as "Chee-na," which some people consider to be derogatory and associated with Japanese aggression. Sixtus Leung first blamed his pronunciation on his accent, but then admitted he did use the phrase but didn't think it was offensive. 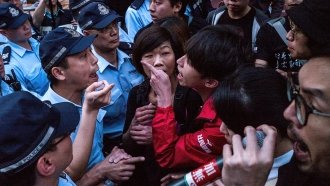 Protests Riddle The 20-Year Relationship Between Hong Kong And Beijing

These six disqualifications come after a rise of activist candidates in Hong Kong. The court's latest decision to remove them from the council is a major blow to their goals.

Leung Kwok-Hung said in response to the decision: "Voters entrusted us with the task of monitoring the government. We've lost that power."