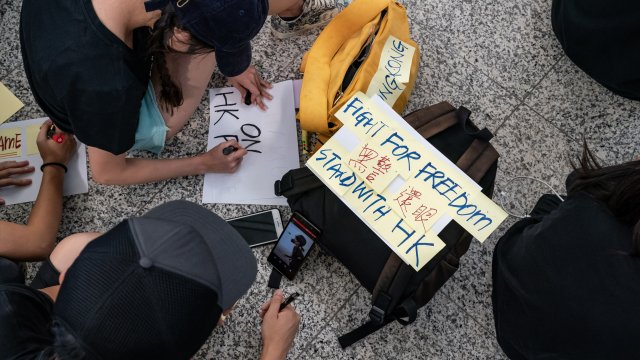 Some protesters have apologized online for the chaos that left thousands of passengers stranded. Hong Kong's main air carrier, Cathay Pacific, says it canceled 272 flights during the occupation. That snarled the travel plans for more than 55,000 passengers, some of whom are now in a difficult spot.

The airport demonstrations ended in violent clashes between police and protesters. At least five people were arrested during the chaos, and two people were assaulted by the crowd after being accused of working undercover for the police.

China's central government in Beijing has seized on the violence to discredit the protest movement, accusing protesters of terrorist-like behavior.

A new court injunction limits protesters from demonstrating outside of specific areas in the airport. There are still some protesters occupying the airport, but service hasn't been totally disrupted as it was for the past two days.

The protesters still occupying the airport said the prospect of more violence won't scare them away from sticking with the pro-democracy movement.

One protester told Newsy: "I would say I'm used to it. Every day we experience a lot of violence like that. So I'm not really scared. ... I think the police have too much power. They just do what they want to do no matter what."