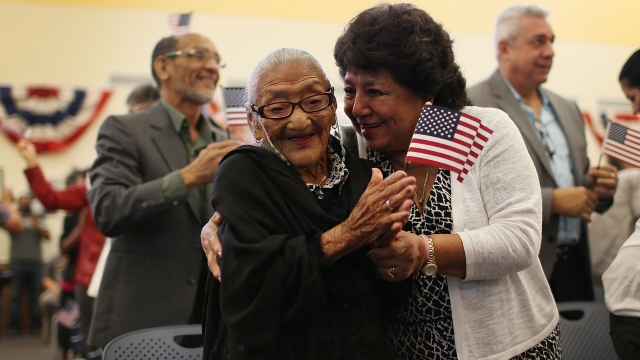 Immigrants from Nepal and Honduras are suing the U.S. over the Trump administration's decision to terminate a program that lets them live and work in the U.S.

The group filed the suit Sunday against the Department of Homeland Security and the U.S. It claims the agency's decision to end temporary protected status, also known as TPS, for those countries was unfair and racially motivated. It also says the Department's new standards of evaluating whether to extend or terminate protection status violates, among other things, the Fifth Amendment's right to due process.

The U.S. grants TPS to people displaced from their respective countries due to war or natural disasters. They're allowed to stay and work legally until things get better back home. Honduras received TPS designation after a hurricane in 1998, while Nepal got its designation after an earthquake in 2015.

According to the suit, "approximately 86,000 Hondurans and 15,000 [Nepalese] TPS holders" face losing their status. It also says that together, those people have over 50,000 U.S.-citizen children that "face an impossible choice between leaving the only home they have ever known and growing up without one or both of their parents."