Homer Plessy, Key To "Separate But Equal," On Road To Pardon 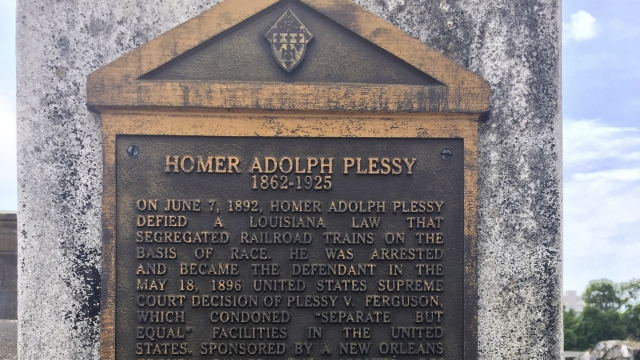 SMS
Homer Plessy, Key To "Separate But Equal," On Road To Pardon
By Associated Press
By Associated Press
November 12, 2021
The Louisiana Board of Pardons voted unanimously to pardon the namesake of the U.S. Supreme Court's 1896 "separate but equal" ruling.

A Louisiana board on Friday voted to pardon Homer Plessy, whose decision to sit in a “whites-only" railroad car to protest discrimination led to the U.S. Supreme Court’s 1896 “separate but equal” ruling affirming state segregation laws.

The state Board of Pardons' unanimous decision to clear the Creole man’s record of a conviction now goes to Gov. John Bel Edwards, who has final say over the pardon.

“Gov. Edwards is traveling today but looks forward to receiving and reviewing the recommendation of the Board upon his return” Tuesday evening, spokeswoman Christina Stephens said.

The Plessy v. Ferguson decision cemented racial segregation for another half-century, justifying whites-only spaces in trains and buses, hotels, theaters, schools and other public accommodations until the Supreme Court unanimously overruled it with their Brown v. the Board of Education decision in 1954. That decision led to the widespread desegregation of schools and the eventual stripping away of vestiges of the Jim Crow laws that discriminated against Black citizens.

Homer Plessy, described in the Supreme Court opinion as of “one-eighth African blood,” was arrested in 1892 after boarding the train car as part of an effort by civil rights activists to challenge a state law that mandated segregated seating.

Plessy pleaded guilty to violating the Separate Car Act a year later and was fined $25. He died in 1925 with the conviction still on his record.

The pardon recommendation came as New Orleans began a weekend marking the tumultuous integration of its public schools on Nov. 14, 1960.