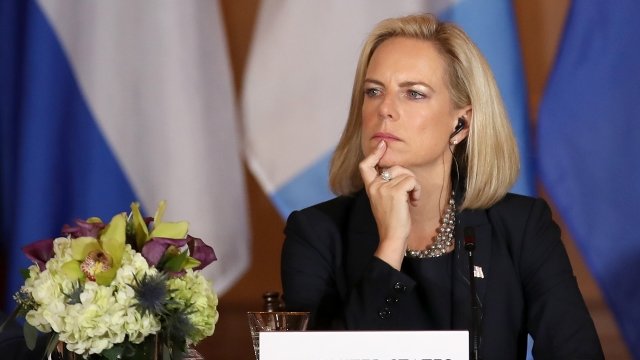 President Trump made the announcement in a tweet on Sunday.

President Donald Trump made the announcement in a tweet on Sunday. The news isn't necessarily surprising. Tension between Nielsen and the president has reportedly been an issue previously. President Trump has blamed her for an uptick in the number of people being arrested at the U.S.-Mexico border.

In late 2018, colleagues reportedly told The Washington Post Nielsen had been unhappy in her position for months. Her one year anniversary mark as secretary was Dec. 6.

Nielsen's departure leaves the top seat of the third-largest governmental agency empty. The Department of Homeland Security employs some 240,000 people and has a $60 billion budget.

President Trump tapped Kevin McAleenan, the commissioner of U.S. Customs and Border Protection, to fill in as the acting secretary of the DHS. Nielsen said she will stay on through April 10th to help with the transition.