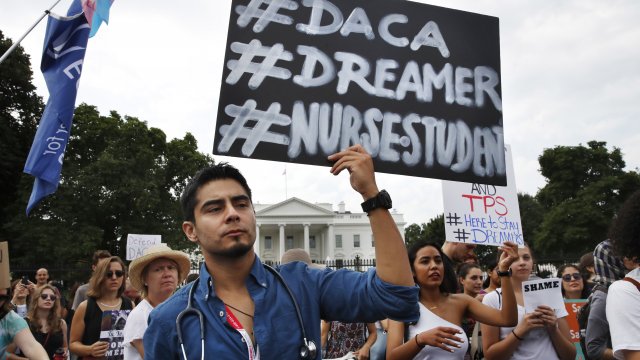 The Trump administration is shrinking DACA while it considers whether it wants to try again to rescind the program, which shields from deportation around 650,000 undocumented immigrants who came to the U.S. at a young age.

The administration announced in a Tuesday memo it is now shortening renewal periods to one year and rejecting all new applications.

"It's disappointing because when the Supreme Court made the ruling, there was a sense of hope in all of us that we had an opportunity to become full members of society," said Andrea Anaya, an undocumented immigrant who just graduated high school.

In June, the Supreme Court blocked President Trump's yearslong attempt to strike down DACA but said the White House can try again with a better legal justification. Advocates hoped the administration would have no choice but to open up the deportation protection to an estimated 300,000 eligible immigrants who don't have it yet.

But the new memo now excludes them.

"We knew that the Trump administration was going to take a step in this direction to try to dismantle the program. But it's still so frustrating," said Anaya.

She moved to the U.S. from El Salvador with her mother when she was 5. She turned 15 — the minimum age to qualify for DACA — right when President Trump rescinded the program in 2017 and she missed out on the protection as a result.

"For a long time, I was very angry. I didn't feel like I had many opportunities. But, you know, this is a situation that we're currently in. At the end of the day, all we can do is fight. We want legal protection and permanent solutions," said Anaya.

Advocates and lawmakers have argued that rejecting new DACA applicants defies the Supreme Court's order. But legal analysts tell Newsy the new memo is a reasonable exercise of executive authority.

"This isn't necessarily good policy or even correct, but if it is reasonable, it may pass federal court muster," said Sarah Pierce, a policy analyst at the nonpartisan Migration Policy Institute.

"Ultimately, the election will decide DACA's fate. At that point, if Donald Trump is reelected, then presumably there's going to be a fuller rescission with a grander statement of reasons. And if Biden wins, then he'll probably try to withdraw this Wolf memo," said Ilya Shapiro of the libertarian Cato Institute.

Shapiro says it's past time Congress comes up with a legislative fix for "Dreamers" to prevent the issue from being stuck in court for years.

"We're going to be still litigating this a decade, probably, after President Obama started DACA. And that has led to legislation by the executive branch, which is not a good thing, whatever your ultimate policy views might be," Shapiro said.